The Universal Serial Bus(USB) is a 4-pin, standardized I/O bus that serves as a serial interface for computer ports. Introduced in 1996, the USB interface has replaced several of the previously used serial and parallel interfaces for printers, mice, modems, keyboards, scanners, digital cameras and other peripherals as a universal interface. The rapid development of the USB interface can be seen in the data rates and range of functions offered by the various versions.

The different versions of the USB interface

Modern USB interfaces meet all the data rate requirements of modern peripherals such as external hard drives, digital cameras, video cameras, network cards, smartphones, video conferencing systems and many other components. While the data rate was 1.5 Mbit/s for USB 1.0 in 1996 and later 12 Mbit/s in the full-speed version, it was increased to 480 Mbit/s in the high-speed version of USB 2.0. This was followed by the super-speed versions USB 3.0 with a data rate of up to 5 Gbit/s and USB 3.1 with up to 10 Gbit/s. 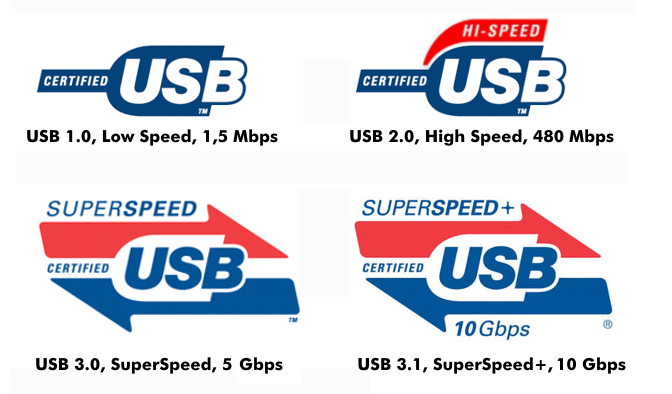 USB 1.0 is referred to as Low-Speed( LS) with a gross data rate of 1.5 Mbit/s. This version works with NRZ-I encoding and bit stuffing. 188 kB/s can be transferred via this interface. The full-speed( FS) version of USB 1.0 has an 8-fold higher data rate of 12 Mbit/s. USB 1.0 already introduced battery charging, USB Battery Charging( USB-BC), which is supported by all USB versions.

USB 2.0 brings it as a high-speed version( HS) to 480 Mbps. It works like USB 1.0 with NRZ-I coding and bit stuffing. Version 2.0 also introduces On-the-Go( OTG) mode, which allows devices to communicate directly with each other, without a personal computer. Another feature introduced with USB 2.0 is the power supply to external devices, USB Power Delivery( USB-PD) with which power up to 100 W can be transferred.

The companies NEC-Corp, Intel, Hewlett Packard, Microsoft, NXP and Texas Instruments have set the course for a faster USB version with the USB 3.0 Promoter Group. This Promoter Group unveiled the specifications for USB 3.0, SuperSpeed USB, in November 2008. USB 3.0 has a data rate that is 5 Gbit/s, which is ten times that of USB 2.0. USB 3.0 achieves this data rate by using 8B/10B coding. USB 3.0 uses Emphasis technology to compensate for cable attenuation, and Cyclic Block Check(CRC) for error correction. 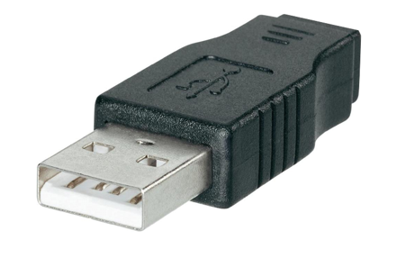 The data transmission of USB

The USB interface is designed as a plug-and-play interface. Peripheral devices can be connected while the device is running and used immediately. The addition or removal of a device is recognized by the USB interface by the load or unload of the terminating resistors.

Data transfer within the USB system is packet-oriented, with the personal computer or a USB hub controlling and managing the data packets. The data packets that handle the data traffic between the USB interface and the peripheral device are time-limited to 1 ms. Each data packet has a Start of Frame( SOF) for the initial identifier and an End of Frame( EOF) for the packet end.

The Start of Frame (SOF) is always sent and is used for synchronization even if there is no data traffic. The peripheral devices are identified by their own ID number, the 8 bit long Proprietary Identifier( PID). In addition, data packets have a 16-bit cyclic block check (CRC) for error detection.

In 2019, the USB Implementers Forum( USB-IF) published the specification for USB4. USB4 is based on Thunderbolt, it uses the USB-C connector and for power USB-PD. The USB variant can tunnel DisplayPort and PCI Express. The architecture defines a high-speed connection with multiple types of end devices, with a data transfer of 20 Gbit/s. The USB4 specification is based on the Thunderbolt 3 specification.

The evolution of the USB interface

With wired USB, data is transferred via a special USB cable. This is a four-core, unshielded (for 1.5 Mbit/s) or shielded cable in which two twisted wires (D-, D+) transmit the differential signals in symmetrical form. The other two wires are used to supply power to peripheral devices and can be used to charge device batteries. This application is done with USB Power Delivery (USB-PD), which specifies five profiles for powers between 10 W and 100 W.

In addition to the wired USB interface, activities have been launched by the Wireless USB Promoter Group for the development of Wireless-USB, a wireless USB technology. This Wireless USB is said to be able to transmit data at up to a data rate of 480 Mbit/s over a distance of 10 m, based on the Ultra Wideband( UWB) radio standard. In addition, also under the name WirelessUSB, there is a standardized wireless technology that can be used for Human Interface Devices( HDI), in the industrial sector, in surveillance technology and in PC-related connection of end devices. This WirelessUSB operates in the ISM band with a data rate of 62.5 kbit/s.

Typical USB components include the USB hub, the USB box, the USB token and the USB stick, whereby the USB stick is used as an external memory component.