Apps or mobile apps are applications for smartphones and multimedia cell phones. They are small or more extensive additional programs for all situations in life, developed by tinkerers, programmers and companies and offered through the stores of smartphone companies. One of the most extensive offerings is for Apple's iPhone.

The range of apps includes several zillions of applications for home and on the move. Apps support navigation, provide entertainment, check costs, track goods and hotspots, or train the brain. The largest offer is in games, and there are also rich offers for taking and editing photos and music tracks.

Apps differ in terms of their focus and objective. Thus, mobile apps are developed for smartphones. In addition to native apps, there are platform-independent apps. Native apps can only run on a specific platform like Android or another smartphone operating system like Symbian, Windows Mobile or Moblin. It is different with platform-independent apps such as the web apps, hybrid apps or cross-platform apps. For example, web apps can be called up using a smartphone browser, hybrid apps support different platforms, and cross-platform apps are independent of smartphones and their operating systems. Here, the user interface is formed by the nativeprogramming interface, and not by a smartphone browser as in hybrid apps. 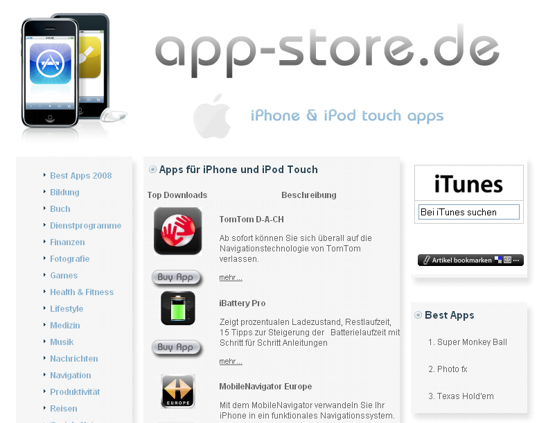 There are the most curious apps and also extremely useful ones. They can be selected and downloaded from Apple's App Store or from the mobile app stores of other providers. Some of them are free, others have to be paid for. The apps are displayed on the iPhone screen as pictograms and are called up with the touch of a finger. The app developer receives a percentage of the sales price for each download.

Apps are available from all providers. Google 's is called Google Play, Research In Motion's ( RIM) is called BlackBerry App World, and Microsoft's is called Windows Phone Marketplace and Windows Store for Windows 8. Established newspapers and magazines are trying to participate in this market and are relying on paid journalistic articles that can be subscribed to via the apps. The future will show to what extent new sources of revenue will open up here. One extremely interesting app is Layar, a kind of smartphone browser with augmented reality. There are also WhatsApp and Line, two apps for instant messaging, real-time data exchange of messages, and Beacon, an app for close-range location in stores with location-based services( LBS).

Other smartphone vendors are also trying to gain a foothold in this lucrative market. BlackBerry, for example, whose apps are geared to the needs of business people. Here, journalistic apps for the business press have established themselves.