As defined by the Federal Communications Commission( FCC), Ultra Wideband (UWB) is a wideband signal with a bandwidth greater than 500 MHz bandwidth in the frequency range between 3.1 GHz and 10.6 GHz. UWB is also defined as a radio transmission technique whose bandwidth is 25% or more of the carrier frequency or is greater than 1.5 GHz.

UWB technology is a technique for WLANs that provides higher transmission speeds than 802.11. The specifications for UWB technology were created by the IEEE802.15.3a working group and, after its dissolution, were further developed by the UWB Forum and the WiMedia Alliance. In addition, the Multiband OFDM Alliance( MBOA) industry forum supports UWB activities. These working groups deal with Wireless PersonalArea Networks(WPAN), short-rangeradio networks and the radio interface. The corresponding technology is used in ZigBee and WirelessUSB, among others. 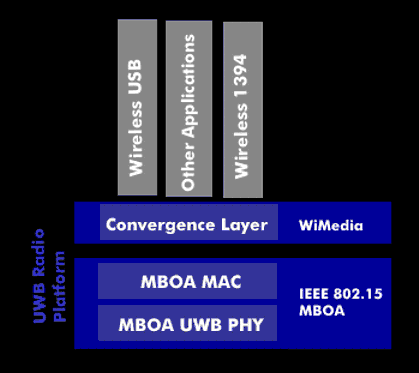 The radio platform for UWB developed by the MBOA recognizes two transport layers: the radio layer and the convergence layer. Various high-speed wireless transmissions are to be implemented over these two layers. 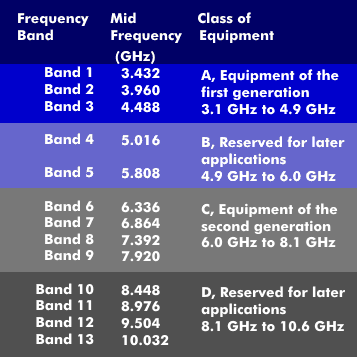 UWB has transmission rates of at least 110 Mbit/s over 10 m. The transmission technique proposed by the UWB Forum is the carrierlessspread spectrum Direct Sequence UWB( DS-UWB) with an extremely wideband emission in the frequency range between 3.1 GHz and 10.6 GHz. In this carrier-suppressed modulation technique, which features high efficiency and lowest power consumption, data is transmitted as a pulse train of low-power RF energy over a wide frequency spectrum. The Federal Communications Commission (FCC) has required a minimum bandwidth of 500 MHz for this and a power spectral density of less than -41.25 dBm/MHz, equivalent to 0.07 µW/MHz.

The UWB Forum is already developing concepts with higher data rates. For example, according to the UWB Forum, the data rate can be increased to 660 Mbit/s by increasing the operating speed. In a further step, the UWB Forum envisions an increase to 1.32 Gbit/s, which will then be realized in the upper frequency ranges between 8.1 GHz and 10.6 GHz.

Areas of application for UWB 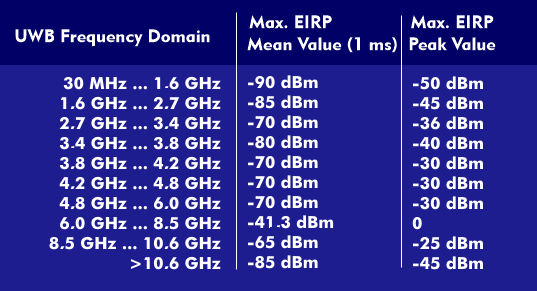 UWB can be used, among other things, for WirelessUSB for connecting peripheral and consumer devices. It can be found in both wired and wireless transmission systems such as short-range radar in automotive technology.

In Germany, the Federal Network Agency approved frequency ranges between 30 MHz and 10.6 GHz for ultra-wideband in December 2007. These can generally be used, taking into account the permissible isotropic spectral power density, the Equivalent Isotropically Radiated Power( EIRP).