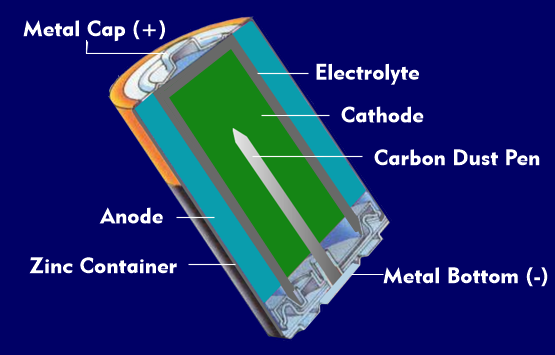 Structure of a battery 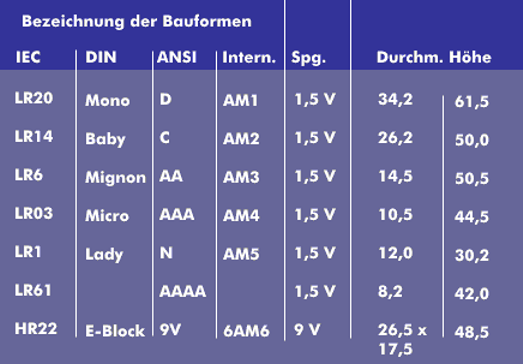 The different designations for device batteries

Most batteries use zinc (Zn), carbon or manganese (Mn). Usually the negative electrode, the anode, is made of zinc and is in the form of a container into which the electrolyte and positive electrode are placed. Battery cells usually have a source voltage of 1.5 V. The positive electrode, the carbon electrode, often contains electrolytically produced manganese oxide in addition to manganese dioxide. Common batteries on the market are zinc-carbon batteries, zinc-air batteries, alkaline-manganese batteries( ZnMnO2), zinc-mercury oxide batteries, and lithium batteries. A few percent mercury (Hg) is added to the zinc electrodes to improve performance. Since the zinc cup partially dissolves during discharge, it is surrounded by a steel shell.

Parameters and characteristic values of batteries

Important parameters of batteries are the nominal voltage or open-circuit voltage, the battery capacity, given in ampere-hours( Ah), the internal resistance, the nominal load and the energy density as the ratio of capacity to weight.

The environmental impact of batteries is described in the Battery Ordinance(BattV) in which the limits for pollutants and disposal are regulated. One of the most environmentally friendly batteries is the paper battery. It does not use chemical elements harmful to the environment and can be composted.