VESA publishes the specifications worked out by well-known companies as an industry standard. The communication concept of the DisplayPort is based on the transmission of data packets, just like Ethernet or PCI Express. There is one main link, the Main Link, which consists of four lanes and transmits the video and audio data unidirectionally from the data source to the data sink. In addition, there is a bidirectional auxiliary channel and a unidirectional return channel for Hot Plug Detect( HPD). There are also lines in the interface for the supply voltage. Optional features include audio transmission and High-Bandwidth Digital Content Protection( HDCP) copy protection.

The characteristics of the DisplayPort

DisplayPort characteristics include a 10.8 Gbit/s High Bit Rate( HBR) data rate in the main channel, which can be used to drive high- resolution monitors at 2,560 x 1,600 pixels or digital signage at 4K resolution.

The full data rate can be transmitted over a cable length of 3 m; for longer lengths of up to 15 m, the bandwidth is reduced to the values required for the transmission of high-definition television (HDTV) with progressive scan, namely 1,080p. 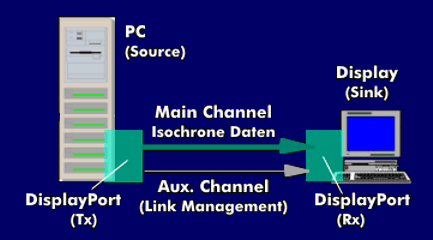 The interface of the DisplayPort is comparable in its electrical characteristics to that of PCI-Express. It uses a small user-friendly connector and can work with cable lengths up to 15 meters. Four DisplayPort connectors can be accommodated on one PCI card. Since transmission via copper cables has reached its limits, fiber optic cables are available as an alternative. The LwL technology can transmit data rates of 21.6 GB/s over 100 m in DisplayPort 1.2. This corresponds to the 4K standard with 24-bit color depth and 60 Hz refresh rate.

The layer model of DisplayPort

Comparison of the digital interfaces DisplayPort, LVDS, DVI and HDMI

DisplayPort has a layered architecture and can work with a wide variety of transmission media, without changing the link layer. The interface offers compatibility with High Definition Multimedia Interface( HDMI) and Digital Visual Interface( DVI), and is expected to replace them and Low Voltage Differential Signaling( LVDS) in the long term. 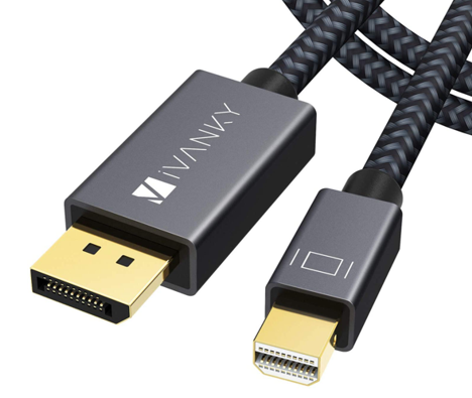