Apple's iPhone is a smartphone for voice and image communication. It combines the functions of a cell phone, iPod, digital camera, and Internet communication device with e-mail, smartphone browser, online map service, and search functions. The iPhone has some organizer functions and automatically synchronizes with the connected computer. Further developments are marketed as new versions.

With the iPhone you can surf the Internet, use Internet telephony( VoIP), watch Internet television( IPTV) or receive voice mails, but with the difference that the voice mails are listed and you can selectively choose the important ones. There are also several thousand additional programs, called apps, that can be downloaded to the iPhone. 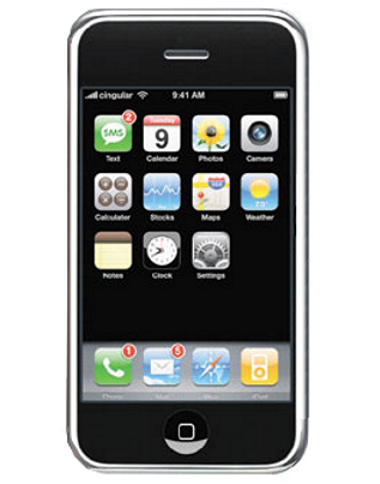 Several sensors support the user and ensure an economical use of energy. These sensors include the finger sensor, which can be used to unlock the device, and the touch-sensitive screen, which allows all inputs to be made with the touch of a finger. Other sensors monitor whether the user is on the phone or watching mobile TV. The display is switched off during calls to extend the battery life. In addition, a brightness sensor adjusts the backlight to the ambient light. A gyro sensor, which is an inertial sensor or position sensor, detects whether the iPhone is held vertically or horizontally and derives the portrait or landscape format in which the picture is displayed. In addition, a magnetron fulfills a compass function together with an acceleration sensor.

The iPhone 1 display has a diagonal of about 9 cm and a resolution of 480 x 320 pixels. In the fourth version, this resolution was quadrupled to 960 x 640 pixels and is 1,080 x 1,920 pixels in the iPhone 6 Plus. The resolution per inch was doubled from 163 pixels per inch( ppi) to 326 ppi and further increased to 401 ppi on the iPhone 6 Plus. Apple calls the display, which uses In-Plane Switching( IPS), a Retina display. The internal hard drive is available with a storage capacity of 4 GB and 8 GB. The iPhone uses Mac OC X as the operating system and Apple's Safari browser.

As for data transfer, it can be done via UMTS or Long Term Evolution( LTE), via WLAN according to 802.11b or 802.11g or Bluetooth, wired via micro- USB interface or the Lightning interface.