Capacitance (C) is the capacity. InIT technology, the term is used for capacitors, for rechargeable batteries, where it refers to the nominal capacity, and for memories as storage capacity.

The capacity of a capacitor is given in Farad (F), named after the English physicist Michael Faraday (1791 to 1867). Since one farad causes a charging current of 1 A for one second at a charging voltage of 1 V( As/V), in practice one works with much smaller units, which are identified by prefixes: Millifarad (mF), Microfarad (µF), Nanofarad (nF), Picofarad (pF). 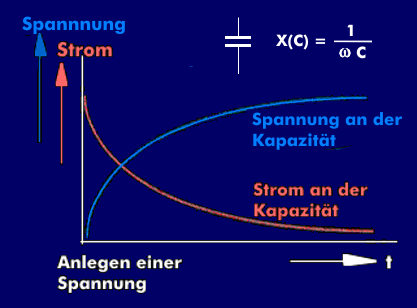 Circuit symbols, formula and charge curves of the capacitor

Important parameters of capacitors are the operating voltage, the insulation resistance, the temperature coefficient and the equivalent series resistance( ESR).