Dielectric is a non-conductive material used in capacitors and cables. It is a non-conductor whose atomic structure has no freely moving charge carriers. Dielectrics can be solids, but also liquids and gases.

Inelectronics and communications, dielectrics are used in capacitors, cables, antennas and connectors. In capacitors, it is the material that lies between the two electrodes; in coaxial cables or RF connectors, it lies between the inner conductor and outer conductor. Dielectrics used in capacitors can be non-conductive liquids such as oil, non-conductors such as ceramics, glass, plastic, mica (mica) or rubber, but also oxide layers and air. In high- frequency cables and RF connectors, on the other hand, plastics such as polyethylene( PE), polyvinyl chloride ( PVC), polypropylene( PP) or polytetrafluoroethylene(PTFE) are used.

The dielectric of cables 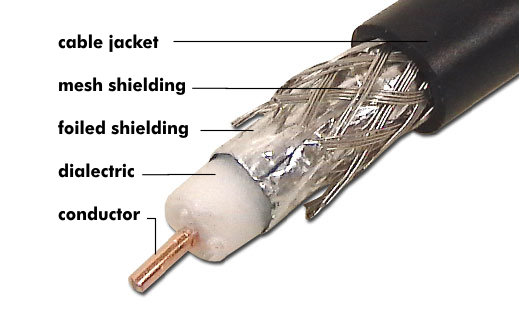 The dielectric of capacitors

In addition to the dielectrics mentioned, there are metallized paper-based and plastic-based dielectrics. Capacitors on metallized paper are marked MP, those, with metallized plastic film are marked MK. And then there are the capacitors based on oxides, such as aluminuim oxide( Al2O3), tantalum pentoxide (Ta2O5) or niobium pentoxide (Nb2O5). In film capacitors, the temperature behavior of the dielectric affects the capacitance of the capacitor to a greater or lesser extent. The temperature properties of the dielectric are characterized by a three- digit letter-number combination. Well-known designations for these temperature properties of ceramic capac itors and multilayer ceramic capacitors( MLCC) are X7R, X8R, Y5V, and negative-positive-zero (NPO).

Dielectrics with permittivity greater than 4 are referred to as high-k dielectrics. These include silicon nitride( Si3N4), aluminum oxide (Al2O3) and titanium dioxide( TiO2). Such high-k dielectrics are used, among other things, in MIS capacitors(Metal Insulator Semiconductor) and integrated circuits.