A display is an optical indication of a visual device with which information is made visible. Displays form the interface between man and machine and are based on the conversion of electrical signals into optical signals. According to the type of display, a distinction is made between emitting and reflecting displays.

Emitting displays generate the light by emission, while reflecting ones use the ambient brightness and work with reflection techniques. In emitting displays, light emission is based on the excitation of phosphors, which can be by electrons as in cathode ray tubes, by UV rays as in plasma displays, or by fast charge carriers as in electroluminescence( EL).

Screens for text- and graphics-oriented display 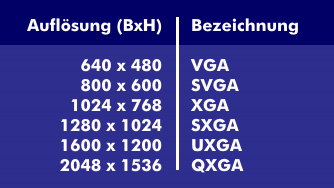 Screen resolutions for screens with an aspect ratio of 4:3

The screen display can be text-oriented or graphic-oriented, or it can assume any combination of both display techniques. Not only characters from a given character set ( standard character set), but also individual symbols (graphic characters) can be displayed on the screen. In progressive scan, characters are displayed line by line from top to bottom and from left to right. It can be monochromatic or colored, whereby the color representation can range between simple and highest resolution depending on the graphics capability of the computer. The color gamut of the display is determined by the color space of the display. 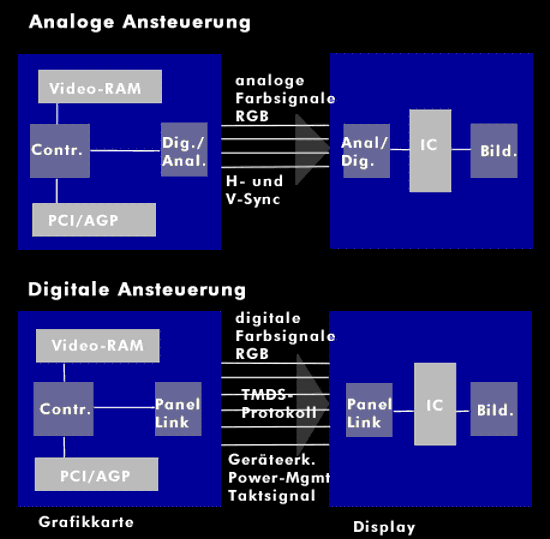 Analog and digital control of displays

Certain requirements must be met by a display used at a workstation. First and foremost, good readability, which is reflected in the contrast. Other ergonomic requirements include freedom from glare, viewing angle, flicker-free operation and mobility (swiveling and tilting).

Screens usedin computer technology are rectangular and had a screen aspect ratio of 4:3 as a standard format. The current standard format is 16:9. Other, wider formats are quite common. Other parameters that affect screen display and size are screen resolution and screen diagonal.

The digital connection is based on the panel link and Transition Minimized Differential Signaling( TMDS) and is implemented in Digital Flat Panel ( DFP), Plug and Display(PnD), the Digital Visual Interface( DVI) and the GigabitVideo Interface (VGIF).