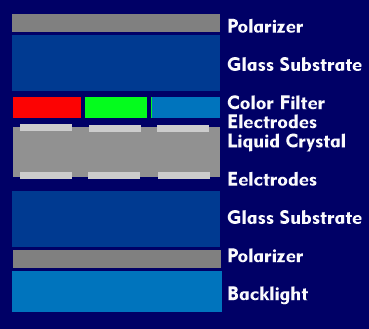 Structure of a TFT-LCD

Above this are the color filters for the primary colors and above the overlying glass layer is another polarization film. This in turn rotates the light by 90 °. Due to this polarization, the light that has passed through the first polarization foil is not transmitted by the second foil. After passing through the first foil, it is polarized in only one plane. Only when the light between the two polarization foils experiences a 90° rotation, it can pass the upper foil. This rotation is caused by helically arranged liquid crystals located between the electrodes. The behavior changes with the application of an electric field. The liquid crystals are controlled by thin-film transistors.

The color filters for the primary colors filter out the corresponding primary color from the polarized white light. Each individual color dot consists of three TFT cells; one each for red, green and blue. TFT technology is an active technology characterized by contrast values of 600:1 and higher. One speaks of an active matrix( AM) when all pixels are controlled matrix-wise, namely via columns and rows.

TFT screens are also known as TFT-LCD displays. A disadvantage of this technology is the relatively long response time, which is several milliseconds. This switching time is required for the alignment of the liquid crystals. The relative brightness of TFT displays is 400 cd/m2 and above. The viewing angle is up to 140°.