In analog television, the luminance signal for brightness and the two color difference signals "U" and "V" are obtained from the component video. The blanking (A) and synchronization (S) signals are added to the luminance signal before modulation. The resulting BAS signal is transmitted in amplitude modulation for all television standards, suppressing the carrier signal and transmitting a sideband with reduced bandwidth. The modulation of the chrominance signals is different for SECAM and the PAL television standard; while SECAM transmits the color signals with frequency modulation, the PAL television standard and NTSC operate with amplitude modulation. In this case, the modulation of the color difference signals takes place within the spectral range of the brightness signal. The sound signal, on the other hand, is transmitted outside the spectral range of the brightness signal; for this purpose, the sound signal is modulated onto a sound carrier using frequency modulation. 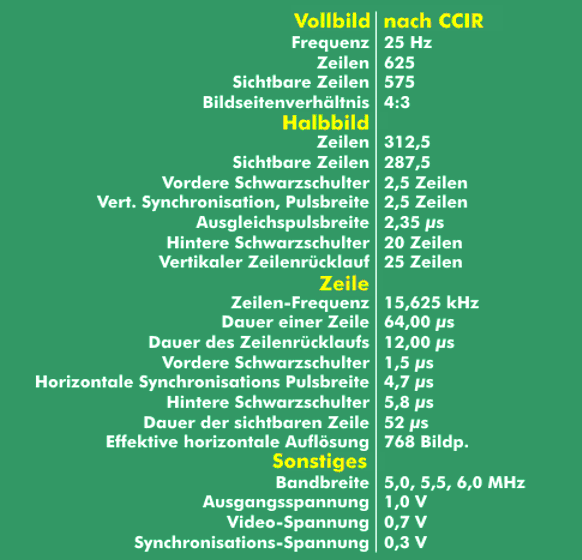 Television picture specifications according to CCIR

In terms of reception, the FBAS signal is obtained from the luminance signal, the chrominance signal, the blanking signal and the synchronization signal, which is split into the three primary colorsred (R), green (G) and blue (B) for the control of color screens.