A broadcast transmission is equivalent to a broadcast call or broadcasting, it is the simultaneous transmission from one point to all subscribers. Classic broadcast applications are radio and television. 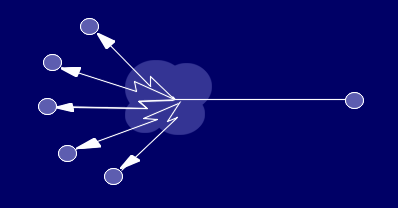 Broadcast principle: one to all

In order to address certain classes of receivers or all connected stations simultaneously in a local network, multicast or broadcast is possible.

Mobile networks always involve point-to-point connections over which television images are transmitted in unicast with streaming video to the receiver's smartphone. This technique is extremely bandwidth-intensive and affects the efficiency of mobile networks, since thousands of dedicated point-to-point connections have to be established for television transmissions. This is why LTE-Broadcast was developed, a technology that allows an unlimited number of users to receive the same television images simultaneously. LTE broadcast uses a fixed radio frequency for this purpose.