Moblin is an open source software for the development of a Linux-basedplatform for mobile devices, including nettops, netbooks and Mobile Internet Devices( MID) with Intel Atom processors, but also for future application fields such as vehicle infotainment.

The center of the architecture is the "Moblin Core" on a hardware-independentlayer for the development of future end devices. Below the Moblin Core are the Linux kernel and the device drivers, and above that the user interface. With the fastboot function of the Intel processors, boot times of less than 10 s are achieved.

The user interface consists of a screen interface and a GTK-basedframework with the application framework Hildon. GTK stands for Gimp ToolKit and is a GNU library for creating graphical user interfaces( GUI). The Moblin Image Creator( MIC) enables the development of a Linux file system for mobile devices, and a power management policy extends Linux power management. The Linux Connection Manager establishes connections to the Internet and can be extended with plug-ins for additional network and WLAN technologies. 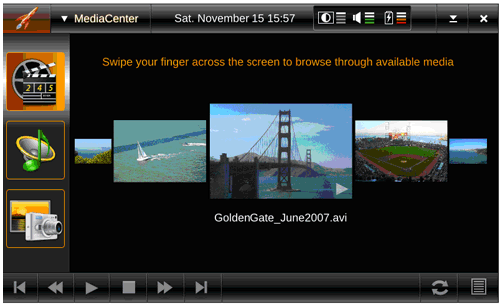 "m_zone" is the name for the desktop for quick access to appointments, recently opened files and websites, and via shortcut to the most frequently used programs. A taskbar at the top of the screen and other desktop panels, including a "Status Panel" with the user's updates in his social media accounts like Facebook and Twitter.

The integrated messenger of the "People Panel" shows if and which people from an address list are online. The usual protocols are available for chatting without having to open another program. A Mozilla-basedweb browser is integrated in the "Internet Panel", which can be controlled with finger movements on a touchscreen. The browser also displays websites that contain elements from Adobe Flash. The "Media Panel" searches the user's locally indexed videos, photos and audio files.

In addition to Intel, from which the Moblin project initiative has originated since 2007, several compatible Linux distributions are involved in Moblin. Independent developers receive the Intel Application Software Development Suite with a C++ compiler for Linux, code libraries, a debugger and Intel's VTune Performance Analyzer.