Touchscreens and multi-touchscreens are ideal for presentation terminals in Point of Information( POI) or Point of Sale( POS) applications, as incorrect operation via keyboards is eliminated. In addition, touchscreens as well as membrane keyboards are used in input devices, especially in vehicle diagnostics, industrial and plant control, industrial PCs, medical technology, automatic pay stations as well as in cell phones, smartphones, PDAs, tablets and other handhelds with finger or pen input. 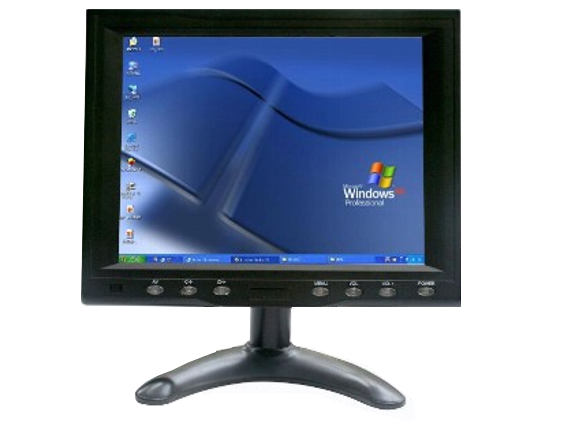 Touchscreens consist of the touch-sensitive display, the touchscreen controller and the software driver. Depending on the method, they work optically with infrared light, capacitively, resistively, inductively or acoustically with surface waves. Most of the listed methods can only detect one touch point and therefore cannot be used in multi-touchscreens. Only the infrared method, the resistive and the capacitive technology can detect several touch points and are also used in multi-touchscreens.

The infrared touchscreen uses an infrared matrix consisting of light-emitting diodes and photodetectors. The light-emitting diodes are located at the top of the screen and on one side of the infrared touchscreen, while the photo detectors are located on the opposite sides of the screen. If an infrared beam is interrupted by a finger or a pen, the screen coordinates can be determined from this. This leads to the triggering of a specific function via the software. Touchscreens with infrared processes are characterized by high image quality. They have multi-touch functionality, the IR technology is extremely robust, it can be used with small and large screens and in sunlight, and the screen only needs to be touched and can be dirty. In multi-touch application, the gestures of the fingers can be converted into zooming, rotating or shifting movements with gesture recognition.

With the capacitive method, the screen surface is divided into a capacitive matrix. This matrix is capacitively influenced by finger proximity or finger pressure, which allows conclusions to be drawn about the XY coordinates. In this process, a low voltage field is generated via the metallic coating ofindium tin oxide( ITO) on the glass overlay. When touched, the operator grounds the surface, thereby changing the electric field. The current flow from the corners of the touchscreen to the operator's finger is proportional to the XY coordinates. Capacitive methods include projected capacitive touch( PCT), surface capacitive technology and mutual capacitance. 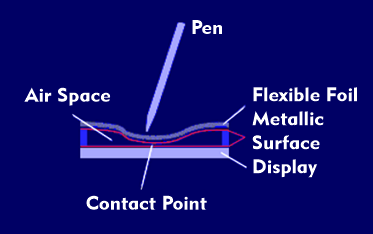 Structure of a resistive touchscreen

The most widely used technology is the resistive technology, which works with two semi-transparent, conductively coated membrane foils made of indium tin oxide (ITO). One foil is located a short distance above, the other directly on the display surface. The distance between the two ITO foils is determined by small, barely visible spacers. A constant DC voltage is applied to the foils. If the upper foil is pressed, electrical contact is established between the two foils. Since the foils are comparable to a resistor matrix, the voltages in the vertical and horizontal directions correspond to the voltage drop and allow direct conclusions to be drawn about the X and Y coordinates at which the contact was made. Disadvantages are the reduction of brightness and contrast due to the coated foils as well as the thickness of the display.

Another technology developed by Wacom works on an electromagnetic basis without direct screen contact. In this case, there is a sensor circuit board below the display on which many antenna coils are mounted. The resonant circuit, which is tuned to the antenna frequency, is located in the input pen. RF energy is emitted successively via the individual antennas. This energy is coupled into the resonant circuit of the stylus in the near field and evaluated for position determination.

The method has two modes, transmit and receive mode. In the transmit mode, which are switched on one after the other in a few microseconds. In transmit mode, oscillating circuit in the input pen absorbs energy, which it emits to the antennas in the sensor board in receive mode. From the field strength of the energy received by each antenna, the pen position is calculated taking into account pressure, tilt and other parameters.

In addition to the aforementioned methods, there is also an acoustic sensor technology, the Tap Tracker. This technology evaluates the runtime ofsound waves, which are picked up by four piezoelectric sensors located at the four screen corners of the touchscreen... When the touchscreen is touched, a unique touch sound is produced. Acoustic Pulse Recognition( APR) is used to determine the touch position from the time-of-flight differences of the touch sound.

Another method is the bending wave method, which works in a similar way to the bending wave transducer. This method is also called Dispersive Signal Technology . Dispersive Signal Technology( DST) is based on the fact that when the touch screen is touched, the vibration creates a wave that spreads evenly in all directions across the screen. The propagating vibration is detected at the four corners of the screen using piezoelectric detectors. The touchscreen controller uses an algorithm to determine the touch position on the display from the transit time of the detected voltages. The bending wave principle is insensitive to contamination. As with other methods, the touch can be made with a finger, a glove or a stylus.

Optical position detection works with two miniature cameras mounted in the top two corners of the screen. The entire screen is evenly illuminated with infrared light from the sides and bottom. If a finger touches the screen surface, the cameras detect less light. From the detected values of the two miniature cameras, the touchscreen controller calculates the touch position.

Some of the sensor techniques described are also used in multi-touch screens, where input is made simultaneously with several fingers.