System Network Architecture (SNA) is IBM's network architecture and by its design is a hierarchically oriented network for controlling terminals and supporting permissive access by terminals to applications in the host. Physical devices such as the host system, front-end processor, cluster controller, and terminals are represented in SNA by physical units( PU). These are programs that represent the essential characteristics of the technical devices to the overall system and, in extreme cases, may be hardwired

An SNA network consists of a set of devices called nodes and connections between them. A distinction is made between 4 types of nodes, the PU types: PU5 for hosts, PU4 for front ends, PU2 for cluster controllers, and PU1 for terminals.

Between the PUs there are then the physical network connections of different nature, between PU5 and PU4 mostly a channel, between PU4 and PU2 a BSC or SDLC connection and between PU2 and PU1 are the terminal connection lines, mostly coaxial cables. The central control function in the host is performed by the System Services Control Point( SSCP). It establishes the sessions between the logical units( LU), controls and monitors the entire network. SSCP, PUs and LUs are Network Addressable Units( NAU). All the components (LUs and PUs) located in the SSCP's domain form its domain. SNA originates from 1974 and has been continuously extended until today. Important new extensions are the PU 2.1/LU 6.2 combination for the detection of autonomous devices in the SNA, which can establish, perform and terminate connections to similar instances independently and without SSCP interference. Communication between these instances is accomplished using Advanced Program to Program Communication( APPC). 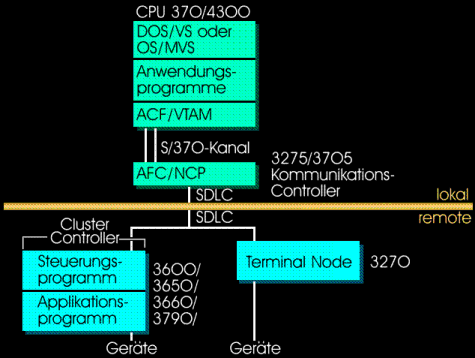 SNA is centrally oriented, which contradicts new concepts of the overall DP organization. The new concept APPN (Advanced Peer-to-Peer Networking) allows linking of autonomous units and permissive routing and ultimately the connection of old SNA and modern system worlds. With the introduction of personalcomputers as possible end devices, SNA had to face the requirements of a network with distributed intelligence in its further development. The introduction of the APPC concept provides a convenient interface for the communication of transaction programs. The APPC concept opens SNA to the needs of the office communications, local area networks, distributed systemssectors.

Finally, within the framework of SNA there are also recommendations for the structure of documents and their exchange Document Content Architecture( DCA), Document Interchange Architecture (DIA). The transaction program package( SNADS) provides the tools for asynchronous communication, based on the APPC interface, and provides a basis for document exchange. However, most SNA networks today are still completely centralized.

Each node contains one or more network addressable units (NAU). A NAU is a piece of software that allows a process to use the network. SNA is architecturally divided into functional layers, which certainly do not correspond to corresponding ISO layers in all cases. 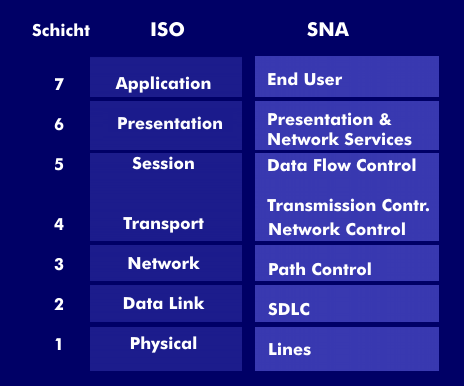 This layer constructs a packet communication resource with the help of bit stream transmission capability from the lowest layer. It builds frames and detects and corrects transmission errors without affecting the higher functional layers. The SDLC protocol of this layer is the same as HDLC except for a few modifications.

This functional layer supervises the sharing of data( remote) processing line resources of the SNA network and routes message elements through them. Path control routes message units between NAUs through the network and provides the transport path between them. The layer is globally equivalent to the ISO network layer, but performs slightly more, since it also performs some of the tasks of a transport layer.

The next higher layer is the transmission control layer, whose task is the creation, management and resolution of transport connections, which in SNA are called sessions. It provides a unified interface to the higher layers in abstraction from the realities of the actual transport networks. Once a session is established, it regulates the data flow rate between processes, controls memory allocation, manages the various message priorities, handles multiplexing and demultiplexing of data and control messages for the benefit of the higher layers, and performs encryption and decryption when necessary. The transmission control layer has two components: the point connection manager and the session controller

It has nothing to do with data flow control in the usual sense, but controls sessions from the Logical Unit (LU) point of view. A session from the Logical Unit point of view is also called a half-session. The layer controls whether the half-session can send, receive, or send and receive simultaneously. It groups related request/ response messages into message strings, limits transactions with a bracketing procedure, controls request/response blocking in accordance with the control mode specified during session activation, generates sequence numbers, and correlates request/response messages with each other

It provides two classes of services to the end- user layer: Presentation Services such as text compression, code conversion, and encryption, and Session Services for establishing logical connections. Furthermore, there are network services that have to do with the operation of the entire network. These services are provided by the LUs in the corresponding devices.

Just as with the OSI reference model, this layer cannot be specified precisely, since its function essentially depends on the application. On the other hand, there are several basic mechanisms. The main anchor of network management is also located on this layer; although management has a much broader significance in an SNA network.