Advanced Peer to Peer Networking (APPN) is the IBM method for decentralized routing. In the classic SNA architecture, all paths are calculated by the System Services Control Points( SSCP) of the individual subareas.

A path predominantly describes a path from an end device( terminal) to an application in the host. APPN describes a point-to-point link at the network layer or transport layer between personalcomputers(PCs) in a local area network( LAN). It prepares the distribution of information and operations in the system network. In addition, more and more IBM systems support decentralized or distributed data processing, especially the /6000 system. APPN provides distributed processing based on Type 2.1 network nodes and LU 6.2 and is a way to determine paths and routes between connected machines even without the involvement of an SSCP, i.e. even without a host. APPN provides the physical connection under APPC. 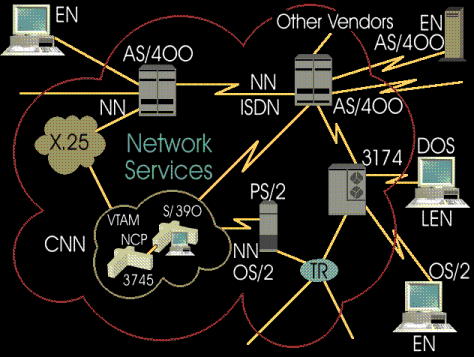 This can be used not only for paths between terminals and machines, but also, for example, for the interconnection of multiprotocol routers. A term closely related to APPN is LEN/Low Entry Networking.