The term node is used in networks as a point of interconnection of transmission paths. However, the term node is also used in computer science and web terminology. In computer science, a node is part of the tree structure that represents any object. And in web terminology, a node is a uniquely identifiable unit of information that cannot be further subdivided. Such a node can be an HTML document and can be uniquely assigned by the Internet address.

In network technology, a node or network node is a device that performs switching functions, but also operates at the network edge as an interworking unit. A node can be a controller, node computer, terminal, printer, disk drive, minicomputer, gateway, or other device. A node can multiply, split, and statistically allocate data channels, as well as switch data transmission channelsusing dynamic allocation. 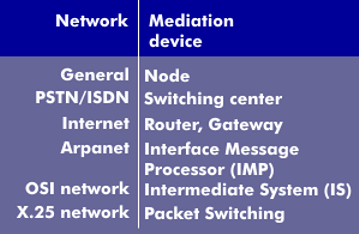 Names for the switching components in the various network configurations.

A node is a source and a sink for data. It is usually implemented by the Data Terminal Equipment( DTE) and/or the Data Transmission Equipment( DCE). The node is known to the DFV access program by a symbolic name. For example, in the SNA architecture, a central node is a Physical Unit( PU) with Virtual Telecommunications Access Method(VTAM) and Telecommunication Access Method ( TCAM) and application programs, a Local Node corresponds to a local IBM 3705-II, a Remote Node corresponds to a remote IBM 3705-II, and a Cluster Controller or Terminal Node may be an IBM 3790, 3770, or 3270.