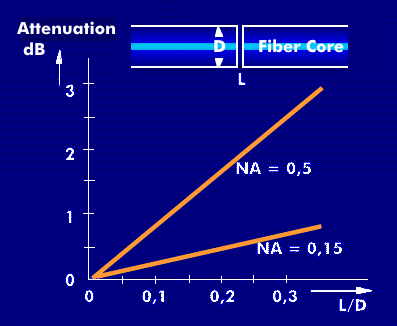 When light is transmittedin an FOC connector, the two fibers are brought very close together to transfer as much light energy as possible from one fiber to the other. Light reflections and attenuation occur at the end faces of the two fibers. The attenuation that occurs depends on the size of the air gap between the two fibers, i.e. on the longitudinal offset of the two fibers. This offset is also called Radially Overfilled Launch (ROFL), and the light loss is called Gap Loss. 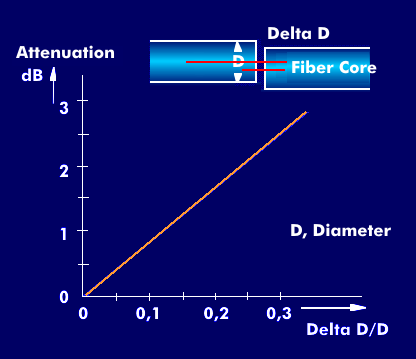 Attenuation of LwL links as a function of lateral offset

To achieve constant attenuation values during repeated mating cycles, it is crucial to keep the gap width as small as possible, but as precise as possible, to about 10 µm. This gap is achieved by precise ferrule lengths or by hollow polishing. 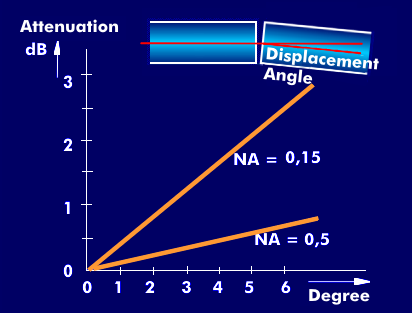 Damping as a function of the tilt angle

Furthermore, the tilt angle between the two fibers has a significant influence on the attenuation of the light signal. The tilt angle occurs with imprecise connection technology, especially with poor couplings with too large a bore or spring guide. Likewise with conical connectors that are too long and wobble in the cone.

Non-parallel end faces of optical fib ers and curved or rough fiber end faces also create additional attenuation. The latter can be dirt and or scratches or stains on the FO end faces

The aperture of the fibers also plays a role in connector attenuation: it is directly included in the attenuation values for the end face spacing. If two fibers have different numerical apertures, the two transmission directions have different attenuation values. If the radiation comes from an FOC fiber with a high aperture and is transmitted into one with a low aperture, it is not fully absorbed by this fiber. The situation is different in the opposite direction: the light energy from the fiber with the low aperture is completely absorbed by the fiber with the high aperture.

For the reasons mentioned above, the highest demands are placed on optical fibers and on the positioning accuracy and thus on the manufacturing tolerance of fiber optic connectors. Minimal tolerance deviations have a serious effect, especially when connecting monomode fibers, since with monomode fibers an axial offset of only 4 µm already causes an additional attenuation of approx. 0.4 dB.

Attenuation of optical fiber connections as a function of lateral offset 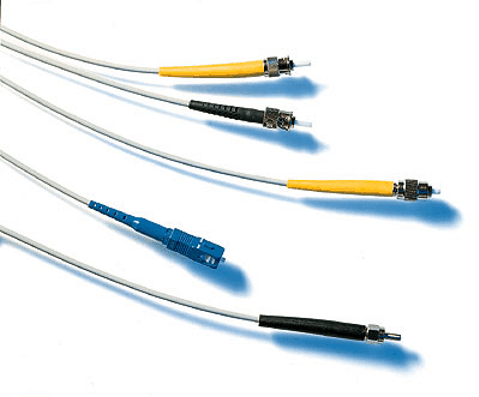 The most commonly used connector systems for gradient fiber are the first six mentioned. They differ in design, closure, connection type and application. In universal cabling, the cabling standard prescribes the use of the duplex SC connector if it is not an existing installation with ST connectors. In such a case, ST connectors can still be used for new connections. In addition to the connector type, the cabling standard prescribes further requirements for the FO connector. For example, only fibers with 125 µm may be used (9/125 µm, 50/125 µm, 62.5/125 µm). The possible number of mating cycles must exceed 500 and the maximum insertion loss must be below 0.5 dB. 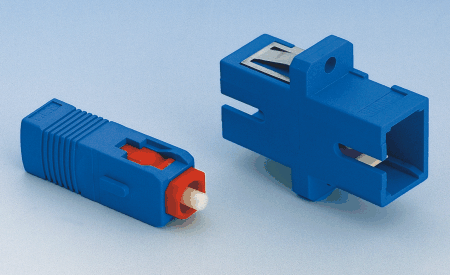 Some of the connectors mentioned can also be used for polymer fibers with 1,000 µm cladding diameter: Thus the SMA and ST connectors. In addition, there are some plastic connectors for these fibers, such as the HFBR connector and the OVK connector.

In addition, there are the SFF connectors, which have significantly smaller form factors compared to the conventional FOC connectors and thus enable a much higher packing density. Several different SFF versions exist, one of the better known of which is the LC connector.