The fiber optic cable (FOC), Fiber Optics (FO), is standardized in DIN 47002 and VDE 0888 and states that it is a conductor in which modulated light is transmitted. The FO can be made of glass fiber or plastic and is characterized, among other things, by its extremely high transmission rate, which can be up to several billion bits per second (bit/s).

Transmission technology on optical fibers is based on intensity modulation, which takes the form of amplitude modulation, frequency modulation or phase mod ulation. An increase in transmission capacity is possible by modulating different light wavelengths. Furthermore, optical waveguides are insensitive to electromagnetic interference, are largely tap- proof and, if they are made of glass, have extremely low attenuation values.

The structure of fiber optic cables 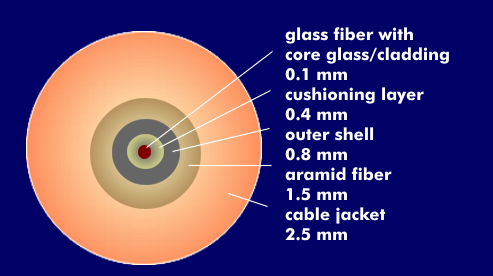 The structure is determined during manufacture before the fiber is drawn. The outer coating, the primary coating, forms a mechanically resistant protective layer. It is surrounded by the secondary coating, which is not necessarily bonded to the optical fiber. In addition to the aforementioned types of optical fibers, there are also hybrid optical fibers consisting of a glass core and a polymer cladding. Examples of these are hard clad silica( HCS) and plastic clad fiber( PCF). There are also the pure plastic optical fibers, Plastic Optical Fiber( POF). And there are optical fibers in which light is transmitted in air instead of the core glass. These optical fibers are called hollow-core fibers. 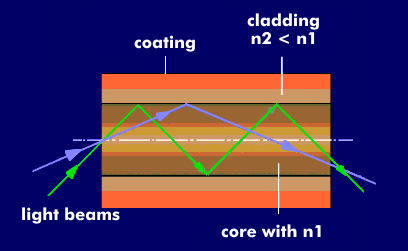 In the core of an optical waveguide with core glass, light components of different irradiation angles propagate. For a light beam to be guided in the core at all, it must be reflected at the interface between the core glass and cladding glass. And it must always be reflected toward the core glass. Such reflection occurs only if the refractive index of the core glass is greater than that of the cladding glass and if the coupling angle of the light onto the fiber end face is smaller than the maximum acceptance angle. In this case, frequent reflection at the boundary layer between the core glass and the cladding glass results in light waves of different travel times, the modes. Light waves that travel a longer distance in the fiber are also referred to as high- mode light beams, and light waves that are guided close along the fiber axis are referred to as low-mode beams.

Structure and refraction profile of the single-mode fiber

If multiple modes contribute to signal transmission inan optical fiber, they are also referred to as multimode fibers. Optical waveguides in which only one mode is transmitted due to a very small core diameter (about 5 µm to 10 µm) are referred to as single-mode fibers.

Structure and refractive profile of the step index profile fiber

For multimode fibers, a further distinction can be made with respect to the type of refractive index profile within the fiber. A distinction is made between step index and gradient fibers. In step fibers, the core glass and cladding glass have a fixed refractive index, and the densities of the respective materials are constant in each case.

The gradient fiber has a parabolic refractive index profile in the core. Beams traveling at different speeds in a graded fiber cover different distances in the glass fiber. Since the phase velocity of the beams is constant in such a fiber, the differently transported beams also have different travel times.

The effects of dispersion lead to a very strong change in the output signal relative to the input signal, especially with long media lengths or high data rates. The gradient fiber was designed to circumvent the resulting differences in propagation time. This is a multimode fiber with a parabolic refractive index profile in the core. In these fibers, the beam path of the modes is no longer straight, but almost sinusoidal. Common fibers, some of which are standardized (e.g. by ITU, German standard VDE 0888), have a core diameter of 50 µm, 62.5 µm, 85 µm with a cladding diameter of 125 µm. 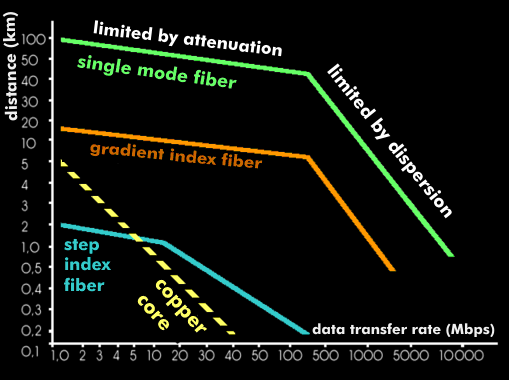 Transmission rates of optical fibers as a function of distance