Android is a smartphone operating system from the Open Handset Alliance for mobile devices such as smartphones and smartwatches. On November 5, 2007, Google Inc. joined forces with over 30 members of the association to develop the open source operating system. On October 22, 2008, the first cell phone with Android appeared, the HTC G1, which was offered in Germany by T-Mobile.

The Android software platform consists of the operating system, middleware and applications from third-party manufacturers, who can contribute their own applications via several programming interfaces( API). In this way, missing functions, including multitasking originally, can be supplied by developers and third-party providers. Android's functionality can be greatly expanded by apps, which are externally developed additional programs and applications. Google, the driving force behind Android, provides applications like Google Maps, the online text program Google Docs, an appointment calendar, YouTube or the chat protocol GoogleTalk. 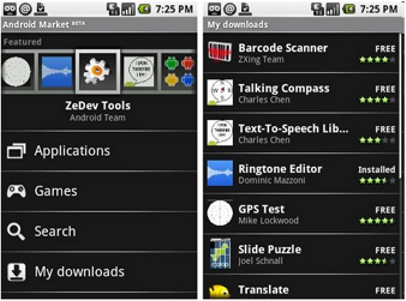 Regardless of the hardware, the current programming interface supports a camera, a camcorder and a gallery function. The operating system also allows setting up a VPN client(Virtual Private Network).

Unlike Apple 's iPhone, the Android web browser also loads up to eight websites in the background. This multitasking capability makes web browsing a bit faster.

Functions of the browser

A search function, the Quick Search Box, is availablein Android's version 1.6, which can be used to query search terms via browser bookmarks, contacts and the web. The system remembers the most frequently searched keywords and places them at the top of the results list in a later search. Android's search framework also allows third-party content to be displayed in the Quick Search Box. The user simply adds the corresponding application to his search settings. In order to display applications on different devices and with different resolutions, Android 1.6 supports multiple display sizes.

The Android browser has the Google Voice Search feature. With this voice search, you speak your search terms via the microphone of the cell phone to start the search. GestureBuilder, a tool in the Software Development Kit( SDK), also allows app developers to incorporate user gestures into their apps and associate them with specific actions. With Pico, Android 1.6 has a multilingual speech synthesis engine. Applications can use it to read a text string in multiple accents, including English, German, French, Italian and Spanish.

Version 2.0 allows the use of multiple accounts for email and contact information. The Chrome browser supports local SQL databases and displays videos in fullscreen, among other things. In addition, other Bluetooth profiles such as the Phone Book Access Profile( PBAP) or the Object Push Profile( OPP) are supported.

The Google Play user interface provides access to third-party applications and games; unlike the Apple iPhone, downloads are only possible via a mobile device, not a desktop PC. Google Play groups together the applications for the Android platform. The user can see the most popular applications, specific categories, games or a list of downloads that have already been installed. Developers can upload their applications and offer them for free or for a fee, while users rate and comment on these programs.

Later versions of the operating system carried codenames of candy in alphabetical order, starting with Cupcake for Android 1.5 on April 30, 2009, and Donut for Android 1.6 on September 15, 2009.