Middleware refers to an additional layer in a more complex software structure whose task is to simplify the access mechanisms to layers arranged below it and to hide the details of their infrastructure from the outside world. For this purpose, the middleware provides functions for distribution as well as services to support the application. In this respect the result of a middleware is the discharge of the application programs and in addition to optimize by a higher productivity the development process. 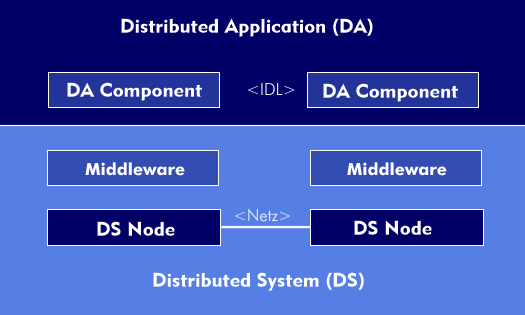 The figure shows that communication-oriented middleware sits directly on top of the operating system as an independent layer and flexibly supplements its functionality. An essential element is the handling of different data formats so that all components involved can interpret the data to be processed in the same way. The preparation of data into a format for transmission is called marshalling, while the recovery of data is called unmarshalling. An example in this context is the Common Data Representation( CDR) of CORBA. 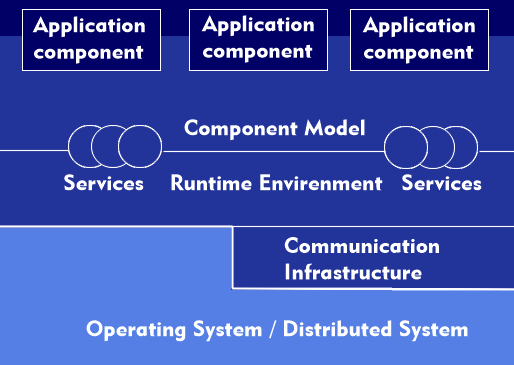 The illustration clarifies the principle of the application-oriented Middleware.

The run time environment offers in addition of the structures of a distributed operating system among other things the administration of connections, concepts for concurrency, availability scenarios with failure of a component as well as extended safety functions.

Application-oriented Middleware can be differentiated regarding their concrete implementations into the following technologies: 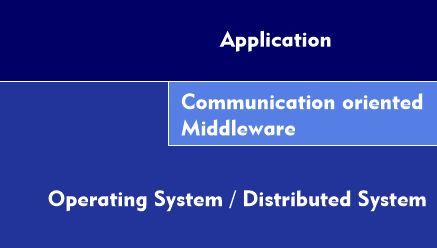 A typical example for the employment of communication-oriented Middleware shows the illustration in connection with distributed systems. Originally distributed systems - also called computer networks - offer only basic communication services as well as simple measures for security and error handling. If an application is based directly on the protocol stack of the distributed system, this is certainly advantageous for high performance, but at the same time means a high level of effort in implementation and control. Here, the complexity from the application's point of view can be minimized by defining middleware as an additional software layer. Here, then, the middleware defines the logical pattern of interaction between the partners in distributed systems, so that the original infrastructure of the application itself remains hidden. Both asynchronous and synchronous forms of communication are supported by the middleware. The example also shows the Intelligent Calling Interface (also IDL, Interface Definition Language), which is so-called for the application. The middleware also defines functionalities such as application concurrency and data management, security and management, and name and directory service management.

Middleware vendors' approaches vary widely. For example, while Microsoft's .NET relies entirely on the integration of middleware and operating system, other vendors such as IBM or Sun take the opposite approach of separating middleware and operating system to be able to ensure interoperability with different vendors. Also, the concepts supported depend on the particular market environment served, which speaks for a certain diversity of middleware. On the other hand, proprietary implementations from a particular vendor can lead to dependency on that vendor's product. Ultimately, middleware is a decisive feature of a specific software architecture. Finally, a brief summary of popular middleware products: SAP Exchange Infrastructure, IBM MQSeries, WebSphere Application Server (IBM), CORBA (Object Management Group, OMG), Enterprise Service Bus (Oracle) and Tibco (TIBCO).