The Extensible Authentication Protocol (EAP), described in RFC 2284, is an extension of the Point to Point Protocol( PPP) based on 802.1x. The EAP protocol provides a fundamental foundation for a comprehensive, centralized security concept in networks and WLANs. 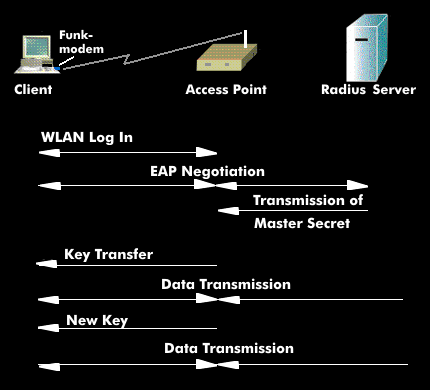 Functional sequence of the EAP protocol in WLANs

EAP data packets should only be transported on a Layer 2 link between two end systems, such as between a personal computer( PC) and its switch port, and should not be forwarded through switches.

The EAP protocol also exists in several versions as EAP- TLS with logon via a certificate infrastructure, EAP- GTC with logon via a token infrastructure, EAP-TTLS with tunneling and in proprietary versions, as Protected EAP( PEAP) from Microsoft, or in the versions used by Cisco, the light version LEAP and as EAP-FAST, which stands for EAP Flexible Authentication via Secure Tunneling.

In addition, there are several variants for different transmission media. Namely via local area networks( LAN), EAP over LAN( EAPoL), and for WLANs as EAP over WLAN (EAPoW).