The Point to Point Protocol(PPP) is designed as a protocol for dial-up to the Internet over circuit-switched networks. It is designed to encapsulate datagrams over serial lines and supports the transmission of LAN protocols such as the IP protocol, Internetwork Packet Exchange Protocol( IPX), DECnet, Appletalk, and Connectionless Network Protocol( CLNP) using bridges and routers.

The PPP protocol is intended to address the interoperability limitations caused by the encapsulation technique used by bridges and routers when transmitting over wide area links. Regardless of the type and number of identical LAN protocols supporting two communication units, communication was only possible if both units had the same WAN protocol. The PPP protocol solves this problem by supporting multi-vendor routers and bridges on WAN connections.

The PPP protocol can transmit data over synchronous and asynchronous dial-up and leased lines. It is therefore able to work independently of the respective physical interface. The only prerequisite required when using the PPP protocol is a completely transparent, fully duplex-capable data line.

The data format of the PPP protocol 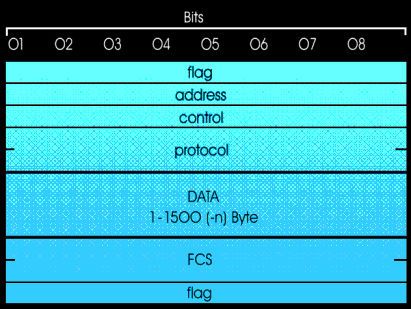 Data frame for the PPP protocol

The data format of the PPP protocol has fixed data fields and begins and ends in each case with an 8-bit flag. This flag always has the bit combination 0111 1110. The flag is followed by the 8-bit long address field, which is set to 111 111, since the PPP protocol does not currently support an address mechanism. The following 8 bit long control field defines the Unnumbered Information( UI) command. The binary structure for the Control field is 000 001. Only data packets with these values are processed. The following 2- byte Protocol field defines the further handling of the data packets. These can be defined network protocols, but also routing protocols. The following information field contains the headers and data of the network protocol defined in the protocol field. The 16 or 32 bit long checksum field( FCS) forms the conclusion before the flag.