Encapsulation is a process in which frames or data packets of higher- layer protocols are extended by the headers of the layers below so that they can then be transmitted via the physical layer.

The protocol data unit( PDU) of the highest layer is the application protocol data unit( APDU). During encapsulation, it is extended by the header of the presentation layer and, together with this, forms the Presentation Protocol Data Unit( PPDU), which contains the APDU. This can be extended in the transport layer by the transport layer header and forms the Transport Protocol Data Unit( TPDU) and so on. When the protocol data units are equipped with all functionally required headers, they can be transmitted to the communication partner. 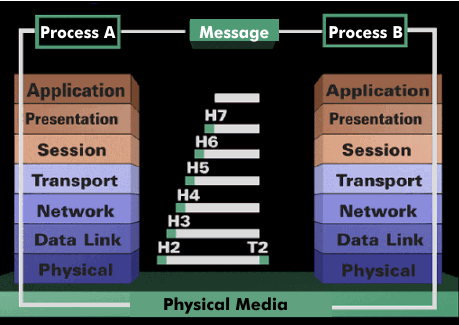 Adding headers as the data passes through each layer

The destination station unpacks the protocol data units by separating the individual headers until only the application PDU is available for the destination station to process. Encapsulation also takes place during tunneling, where the headers of different network and transport protocols are sometimes even packed into each other several times.