DECnet is the name of the Digital Equipment Corporation( DEC) network architecture. Development began in 1975 and has so far included five phases. Each phase extends the services of the previous one, and the products of the different phases are compatible.

The most striking features ofPhase III are the X.25 interface and advanced routing mechanisms, while Phase IV is notable for the SNA gateway and the integration of Ethernet as baseband and wideband. 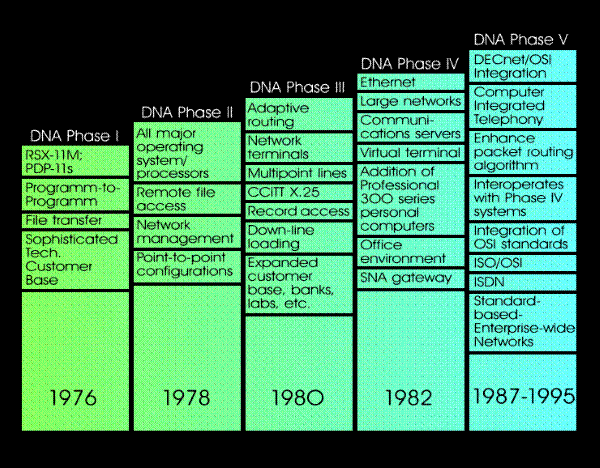 The different phases of DNA

Phase V offers the integration of Digital Network Architecture( DNA) and Open Systems Interconnection( OSI). Here, OSI protocols and DECnet protocols are to be on equal footing. A Phase IV DECnet can comprise up to 64,000 nodes (Phase II up to 255), with larger networks being divided into areas of up to 1023 nodes each. The term node is used here as a collective term for all network-addressable components that can send, receive and process network information. In DECnet, these include routers, servers, gateways and various DEC computers running any operating system, together with the network components required in each case. In addition to DEC components, personal computers with the appropriate software can also become nodes in the DECnet.

The foreign system opening of DNA / DECnet opened up to Open Systems Interconnection (OSI) in the 1980s and 1990s. PC integration in DECnet is called Personal Computing System Architecture (PCSA) and is functionally based on Microsoft's LAN Manager. TCP/ IP protocols, which were integrated in Phase V, represent another communication alternative

The DECnet software is functionally arranged in the following layers

Network Management Layer: This layer includes the functions used by network managers and operators to plan, control and maintain a network.

End to End Communication Layer: The software located here handles the system-independent aspects of the communication.

Routing Layer: This layer defines software that is able to determine an optimal path between two nodes, taking into account certain constraints.

Data Link Layer: Modules in this layer define a mechanism for establishing communication paths between contiguous nodes that are as error-free as possible, whereby they can communicate with each other through an X.25 link or a Digital Data Communications Message Protocol( DDCMP) link

Physical Layer: Defines the way in which device drivers and communications hardware should be implemented to create data over a transmission medium.