The gateway forms an addressable network node with which the services and information of one network are converted into the services of the other network. For example, a gateway can be used to output messages from theSMS service in a mobile network as a fax on a fax machine in a fixed network. Or two mobile networks with different architectures can be interconnected. 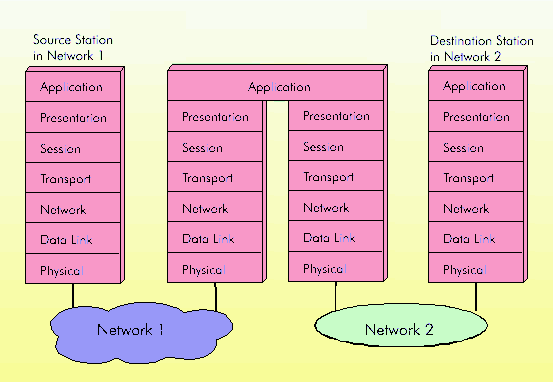 A gateway realizes its implementation on the smallest common layer of the two interconnected networks with gateway protocols. In the case of service implementation, this is the application layer - layer 7 of the OSI reference model- with the application services. In contrast, for routers the conversion is at the network layer and for bridges it is at the link layer. The complete conversion by the gateway includes the conversion of the addresses, the formats, the conversion of the coding, the intermediate buffering of the data packets, the packet acknowledgement as well as the flow control and the speed adjustment.

Due to the complete processing of all communication layers for the connected protocol worlds, a gateway often realizes a higher functionality with regard to terminal emulation, graphics capability, program-to-program communication, file transfer and number of parallel sessions possible than standard protocols that can be used together. A disadvantage is the restriction to two different protocols, which requires n x (n-1)/2 gateways when n protocols are used (quadratic increase!) and generates corresponding support effort and confusion of the logical network structure.