Tape Carrier Package (TCP), also known as Tape Automated Bonding( TAP), is a bonding technique for chips. In this technique, the chips are first applied to a film material such as Upilex( TM) or Kapton (TM). The film material is laminated with a copper foil, over which bonding and connections are realized.

For automatic assembly, the film is provided with a perforation for transport, similar to a photographic film. The chip is inserted at a punched-out location in the film and bonded via bumps, which are contact points. The film material can have a total width of 35 mm, 48 mm or 70 mm and be 75 µm or 125 µm thick. The number of contacts can be varied as desired and can be up to 544 connections. 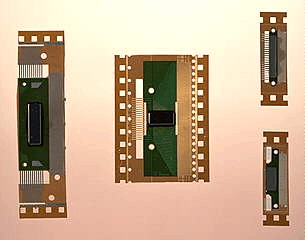 TCP packages are extremely flat, have excellent temperature characteristics and offer a certain mechanical flexibility. They were primarily developed for LCD drivers, but are also used in ASICs (Application Specific Integrated Circuit) and other semiconductor circuits.