Boolean algebra is based on three basic logical forms: conjunction, disjunction and negation.

These mathematical principles are realized by digital logics, where the conjunction represents the logical AND operation of two or more binary numbers, which is performed by an AND gate. With conjunction, the result is "1" only if all input states are "1" at the same time, and the output is "0" if at least one input is "0". 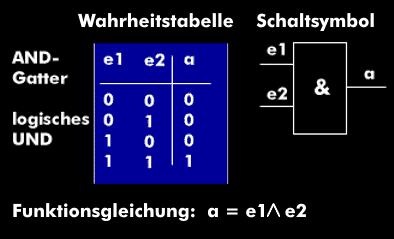 The conjunction is the logical linking of numbers and states, but also of concepts. Such logical conjunction of terms can be entered into searchengines during search queries. The result list then shows only the web pages in which all linked terms are contained at the same time.