Boolean algebra encompasses set algebra, switching algebra, propositional logic and probability theory and forms the computational basis for dual arithmetic and thus for hardware and software computer functions. It is based exclusively on binary values, with operators linking two input values to one output value.

The two basic functions of switching algebra are the AND-gate (A*B) and the OR-gate (A+B), which can be thought of analogously as a switching function. The And function, the AND gate, forms a series connection of two switches. Only when both switches are closed, current can flow over the switches. With the OR function, the OR gate, you can imagine the switches in parallel connection. Current flows across the switches as soon as one or both switches are closed. Another basic element of Boolean operators is the non- operator, the NOT gate, which uses only one operand and performs the function of an inverter. 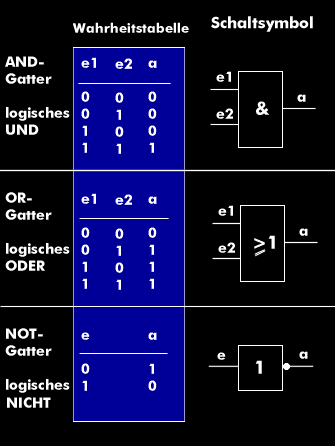 Logical operations: AND, OR, NOT 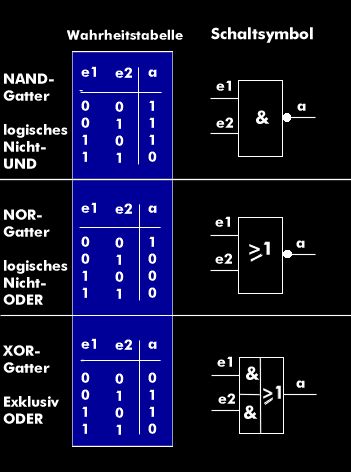 The results are presented in tabular form listing the logic states at all inputs and outputs. This table is called truth table.

In Boolean algebra there are several laws to simplify the arithmetic operation. For example, the Common Identities Law, which stands for the mathematical expression A(A + B) = AB or A + AB = A + B. This expression can be reduced to AB without continuing the calculation process. Another law is the Commutative Law. This law states that changing the order of the variables has no effect on the result. Example: A + B = B + A; A x B = B x A. The Complementary Law states that the addition of a magnitude and its complement is always 1, and that the logical multiplication of a magnitude and its complement is 0.