Client-server architectures emerged in the 1980s with personalcomputers(PCs) and are based on the principle of distributed data storage, in contrast to the mainframe architecture, which is based on a centralized concept. The basic idea of the C/S concept is the separation between the service provider, the server, and service user, the client. Client-server computing( CS) is closely related to downsizing or rightsizing.

Client-server architectures can be divided into two models. One model, where applications run on personal computers or fat clients and interact with the server, is a two-tier model known as two-tier architecture. The client forms the user interface, provides result display and access to the databases residing in the server. 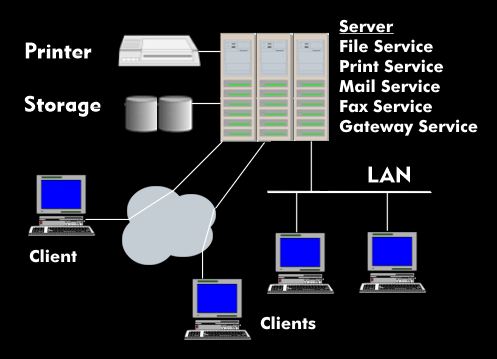 The second model is the Three-Tier-Architecture, a three-tier model. In this model, the middle-tier server lies between the client and the data server. Each of these tiers has a specific area of responsibility. Tier 1 is the client with its graphical user interface, into which the user enters his or her input. Tier 2 is the application server, which is responsible for the business process and data access, and Tier 3, the data server, which provides the business data.

Characteristics of the C/S architecture

Client-server computing is therefore not based on hardware issues, which is why, for example, computers from completely different platforms can perform the server functions. Rather, it is a software architecture and the goal is to break down applications into building blocks to such an extent that the client and server become independent and that functions that can be used multiple times (e.g. database administration, processing and communication functions) only have to be implemented once in the form of the server.

In client-server architectures, the operating systems on the servers must meet high requirements in terms of security, functionality, scalability and modularity. There is basically the alternative between special network operating systems and general purpose( GP) systems. The first group is led by Novell's NetWare and Microsoft's Windows NT/2000 Server. Among general-purpose systems, Unix is the leader, especially in its Linux and Solaris (Sun) versions. On the client side, Mac OS X is an important operating system in addition to the Disc Operating System( DOS) and Windows.