Novell was the first company to bring multitasking to the server, long before OS/2 and Unix. Novell offered from the entry- level version NetWare Lite for 2 to 25 users to the core versions Netware 2.2 for around 100 users per server, NetWare 3.1 for up to 1000 users per server and Netware 4.0 with practically unlimited number of users and global naming and logical server coupling up to versions of NetWare under other operating systems (Unix, Virtual Memory System( VMS) etc.) a broad spectrum, which is supplemented by a multiplicity of infrastructure, auxiliary and coupling programs from host coupling up to network management. 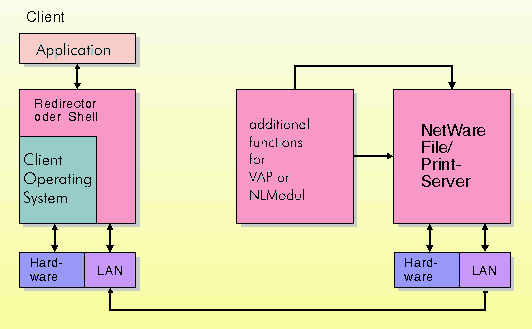 Netware is designed as a hardware-independent operating system. A user can choose from a range of networks with different physical characteristics, covering the full range of different transmission speeds, cables, distances, security levels and expansion options. NetWare supports five interfaces for network and application software to date.

Three of them are special NetWare interfaces: The Internetwork Packet Exchange Protocol( IPX) is on layer 3 and allows direct addressing from the application. The Sequenced Packet Exchange Protocol( SPX) is at the transport layer of the OSI reference model. SPX provides mechanisms that verify error-free communication. The NetWare shell corresponds to the presentation layer of the OSI reference model and is an extension of the functions available under DOS, for example. 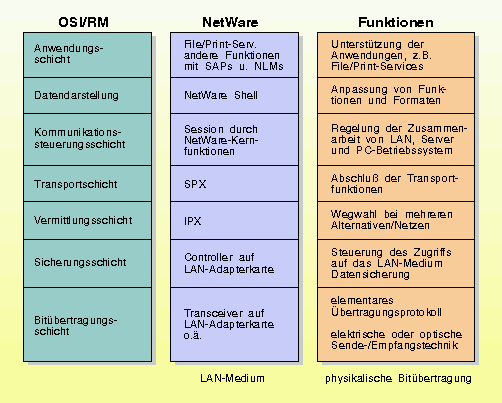 Of course, the LAN standard interface NetBIOS is also supported by Novell. However, NetWare also supports the TCP/ IP protocol family and the NFS(Network File System) protocol, allowing both access from workstations on the Novell network to end systems that use TCP/IP protocols for communication, and vice versa, access from TCP/IP workstations to Novell servers. From the NetWare versions 5.0 and 5.1 also Apple systems are supported without problems and comfortably.

Inversion 6, NetWare presents itself as a web platform that offers modern technologies in e-business. In addition, NetWare 6 supports the connection between Windows, Unix, Linux and Web-basedclients with the NetWare servers. NetWare 6 lives up to the "One Net" claim in that it connects storage environments with high availability and scalability across diverse networks. Clustering technology, which serves to protect resources, software and hardware, ensures high availability of data stocks. Various security and authentication functions are implemented in NetWare 6. Resources are protected by the NetWare Directory Service( NDS). NetWare 6 also meets the demand for access to all network services from a wide variety of mobile and stationary devices. 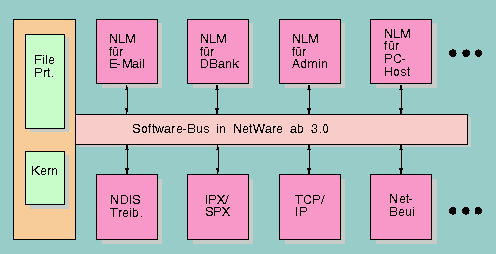 The NetWare 6.5 version offers several additional services besides the standard ones. For example, the open source database MySQL, the web serverApache 2.0 and the Novell Extended Application Server. To the web server there are the well-known script languages like Perl 5.8 or PHP 4.2.3. The communication in intranets is supported by the software for group workstations.