According to their OSI definition, bridges connect subnets protocol-wise on layer 2( LLC, IEEE 802.2) or 2a( MAC layer) of the OSI reference model. Most bridges, especially in the Ethernet area, do not realize LLC functionality, Logical Link Control (LLC), but a connection on the MAC layer. These bridges are therefore also referred to as MAC- level bridges. Intoken ring environments, a bridge often needs a bit more intelligence and therefore realizes LLC functionality.

Bridges are capable of extending the boundaries of a network in terms of station count and length extent. If a network is structured into two subnets by a bridge coupling, each subnet can again get the full station number and length extent according to the defined standard (e.g. Ethernet, Token Ring etc.). In addition, bridges perform simple error boundary functionality. Faulty data packets of the link layer are not transported. 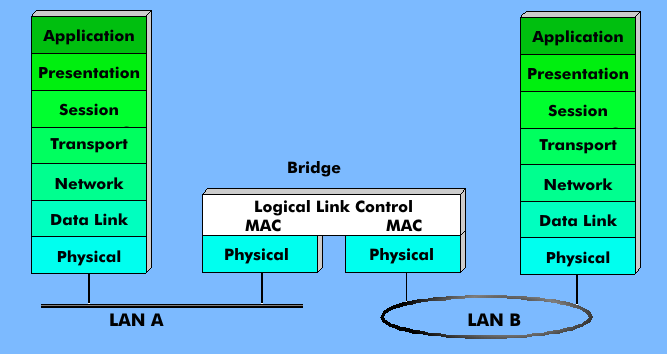 In addition, bridges create a limitation of local traffic to the subnet in which it originated, i.e., if a packet is sent to a station in the sender's subnet, the bridge does not transport this packet. This filtering function contributes significantly to load reduction in large networks, hence the term filter bridges.

Although the basic functionality is identical for all bridges, there are different versions in terms of filter functionality and possible applications. Functionally, there are bridges with static address tables that are preconfigured by the administrator and do not change during operation. Bridges with such functionality are called simple bridges. 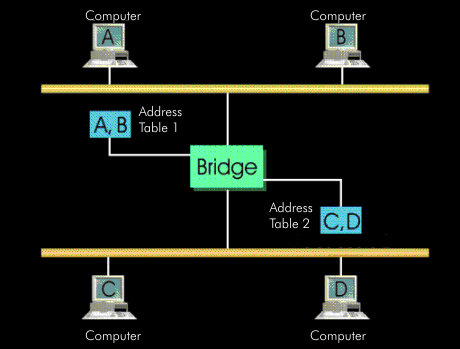 Load separation of two LANs by a bridge

The functionality is very similar to the Transparent Bridge (TB). Such a transparent bridge( TB), which is preferably used in Ethernet networks and IEEE 802.3 networks, transmits frames on a hop-to-hop basis and operates according to a table in which the end nodes and bridge ports are assigned to each other. This method is called transparent because the location of the bridges is transparent to the end nodes.

If a bridge automatically builds up its address tables and also changes them during operation by means of regular updates, it is referred to as a learning bridge.

With regard to the area of application, bridges are divided into local bridges, remote bridges and multiport bridges.