MemoryStick is a trademark protected by Sony for memory cards. Memory sticks come in many versions in different sizes, with different storage capacities and data rates. The entire Memory Stick range can be divided into three groups: Memory Sticks in standard versions, in versions with extended storage capacity and with faster data transfer. The size formats are also divided into three sizes: Standard Format, Reduced Standard Format and Microformat.

As for the standard version of the MemoryStick, it is a relatively large memory card with a storage capacity between 4 MB to 128 MB. The data transfer rate for writing data is 1.8 MB/s, while the readout speed is 2.5 MB/s.

The different versions of the MemoryStick

Since the memory capacity has not met the requirements for quite some time, there are versions in the smaller format, marked Duo, and in the micro format. The same applies to the size of the Memory Stick memory card. With the PRO versions, the memory capacity was increased to up to 32 MB. A further increase in memory capacity occurred with the XC versions. Where XC stands for Extended Capacity. With the XC versions, storage capacities of up to 2 terabytes( TB) can be realized. The file system used is Extended File Allocation Table( exFAT), which supports an address space of 64 bits.

The development of data rates

A comparable development can be seen in the data rates. Whereas the initial data rates were 1.8 MB/s and 2.5 MB/s for writing and reading, these were increased to 20 MB/s and with the high-speed versions, HG versions, to 60 MB/s. The corresponding data transfer rates are shown in the table below. Corresponding data transfer rates are realized in MemoryStick PRO- HG-Duo and in MemoryStick HG Micro. This corresponds to 480 Mbit/s and thus to the USB interface 2.0.

The development of the formats 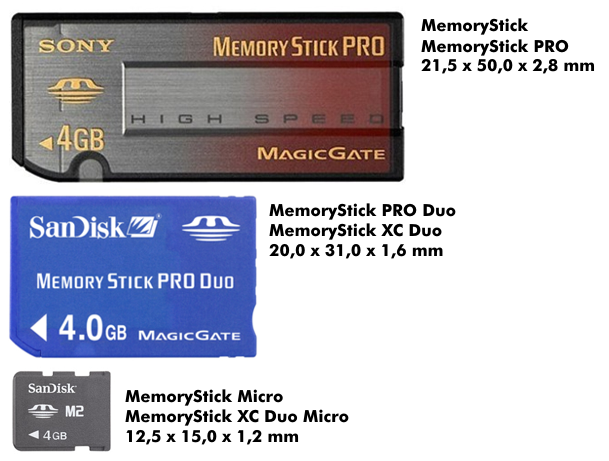 The various standard formats of MemorySticks

The areas of application and above all the competition have contributed significantly to the format reduction of the Memory Stick. The Duo version was the first step towards smaller memory cards. To enable use in small mobile devices, in cell phones and smartphones, a miniature version was developed in the form of the Micro version, which measures just 12 mm x 15 mm and is available in the XC and HG versions.

Memory Sticks operate with supply voltages between 2.7 V and 3.6 V. They have a serial interface with 10 pins and can be plugged into a PC Card adapter and thus connected to the PC Card bus. In addition, there are flash card readers for flash memory that can handle multiple formats and can be connected directly to the USB bus.