As an alternative to floating gate technology, a technology called charge-trap flash( CTF) is increasingly being used in flash memories, which enables higher storage densities to be achieved. 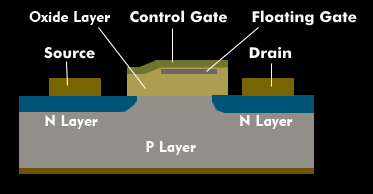 Structure of a flash memory cell with floating gate

Flash memories come in two architectures, as NAND gates and as NOR gates, both as single-cell flash memory cells, Single Level Cell( SLC), but also as multi-cells in which two or three digital states can be stored, the Multi Level Cell ( MLC), the Triple Level Cell( TLC) and the Quadruple Level Cell ( QLC). Since NAND flash es can store two states in each memory cell, this design is given preference over NOR flashes.

Flash memories are characterized by low energy consumption, are addressable byte by byte, and are writeable and erasable block by block. The number of save and erase operations is around 100,000. The access times are around 0.1 ns and are heavily dependent on the SSD controller(solid state disk), while the read speed is well above 100 MB/s. With this data rate, videos can be transferred in HDTV and in the 4k standard.

In flash memory technology, the individual chips, which have several gigabytes of storage capacity, can be combined into chip stacks with large storage capacity. Flash memories are used in hybrid hard disks or solid-state drives (SSD), but also in memory cards for workstations or in fast intermediate memories of mainframes; beyond that, however, primarily in single inline memory modules( SIMM), PC cards and PCMCIA cards, in digital cameras and MP3 players, USB sticks, camcorders and printers, tablet PCs, notebooks and handhelds.

There are special flash modules for notebooks, laptops, PDAs, printers and other peripherals such as digital cameras. The various designs have a proprietary name and notation: Examples include the Compact Flash Card( CF), SmartMedia Card, MemoryStick, Multimedia Card( MMC), the SD card, and others with storage capacities of up to one hundred gigabytes( GB) and above. Reading flash memories can be performed in special card readers, but also in the card slots of PCs, printers and notebooks or via PC card adapters.