In Online Analytical Processing( OLAP) and today generally also in Business Intelligence systems( BI), the data which embody key figures are often stored as so-called facts. They stand in contrast to the dimensions, which embody properties. The term facts is derived from the finance-oriented view of classical OLAP theory. Leading the development of OLAP concepts was Ralph Kimball.

In an OLAP cube, the data structure consists of properties, as described in the term dimension, and of key figures. Each key figure always refers to a particular combination of properties. For example, a key figure "Sales" can be assigned to the location "Cologne", the month "May" and the product category "Non-Food". Thus, it is the sales for non-food products that were generated in Cologne in May. In OLAP theory, this is described as a node of characteristics of all dimensions within an OLAP cube. The place "Cologne", the month "May 2009" and the products category "Non-Food" are dimensional expressions; the key figures "Sales" or e.g. also "Quantity" or "VAT amount" are facts. 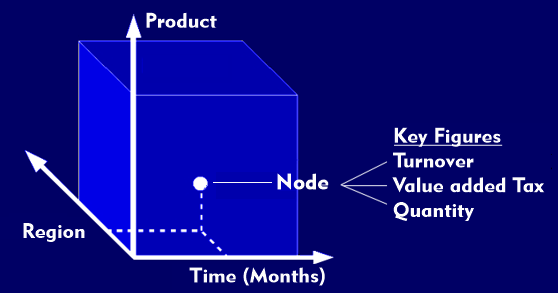 There are also calculated facts. The "VAT amount" may have been generated as a calculation from the key figure "quantity", the "VAT rate" and the "net unit price". The latter two figures, "VAT rate" and "unit price", are not facts in this context. They are not assigned to the nodes of the OLAP structure, but belong to the characteristics of the dimension product ("unit price") or are a separate dimension ("VAT rate"). The decision what are facts and what are not depends on the concrete task and the structure of an OLAP cube.

Since OLAP cubes are usually structured hierarchically, the facts of the lower hierarchy level are aggregated to the next higher level. In most cases this aggregation is a sum operation, but in principle it can be any kind of aggregation function.

The following alternative interpretation of facts is also widely used: Facts can also be understood as expressions on an imaginary dimensional axis - one can easily imagine a directed axis for the key figures "quantity" or "sales". For this reason, facts are often alternatively referred to as measure dimensions.