In general, a port is a logical device interface with the associated protocol. With Fibre Channel( FC), the ports have a special designation that expresses the functionality and is identified by an underscore. The ports differ from the protocol on the interface only in terms of functionality.

Each port has its own port name, which is unique in the world, the World Wide Port Name (WW Port Name). Port names can be implemented in HostBus Adapters( HBA), Storage Adapters( SA), routers, switches, bridges, gateways, etc. 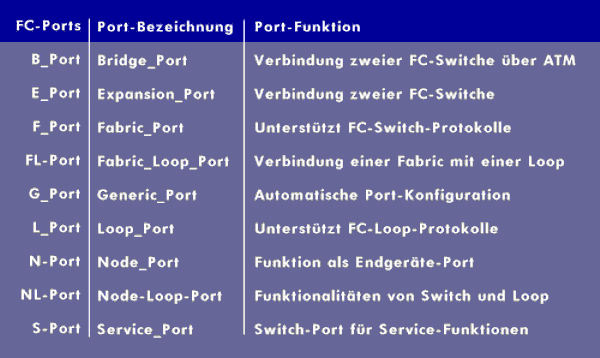 For example, N_Port is used to denote the node port on the end device, and F_Ports are fabric ports on the switch. The addition "L" to a port designation means the coupling of a loop. Thus, FL_Port stands for the coupling of a loop to a switching fabric.NL_Ports are the node ports in an arbitrated loop. The TL_Port( translation port) enables communication between a private loop and a switching fabric. For FC ports, E stands for extended or expanded. Switches can be connected to each other to form a switching fabric via an E_Port. The B_Port is a bridge port. Two FC switches can be connected to each other via ATM or Sonet via this port. G_Ports are generic ports that can be used as E_Ports or F_Ports. S_Ports are service ports that can be used as fabric and node ports, while all other port types can be connected to a U_Port, the so-called universal port.

The port name is a 64-bit address that occurs only once and is assigned to a specific FC port.