Switching fabrics(SF) are fast, switched, serial point-to-point( P2P) connections. The basic idea of switching fabrics is communication between self-sufficient units. This means that many units can communicate with each other virtually simultaneously. Moreover, the number of units in the system is theoretically unlimited.

Switching fabrics are important components for avoiding capacity bottlenecks in electronically switched networks. They are used in optical networks and in local area networks, in RapidIO, Infiniband, Fibre Channel, Ethernet and ATM. They are concepts with buses, backplanes and switching techniques that mediate traffic on the optical domain. As a result, the signals do not undergo optical-to-electrical and electrical-to-optical conversion. Switching fabrics are implemented from small switching units, the switching elements. 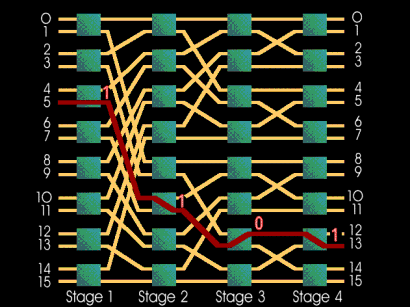 Topology of a Delta-2 network 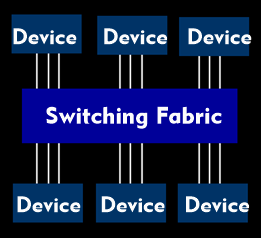 Basic concept of a switching fabric