DigitalAudio Broadcast(DAB+ is digital broadcasting for stationary and mobile receiving equipment. It was developed in the 1980s as part of EUREKA and standardized by the European Telecommunications Standards Institute( ETSI) and the International Telecommunication Union( ITU).

Compared with analog transmission, digital broadcasting is characterized by consistently high audio quality, equivalent to CD quality. In addition, additional information is easier to integrate into the digital audio signal and it has better frequency economy than analog transmission. Transmission power is lower with digital transmission, and fewer transmitters are needed.

Digital Audio Broadcast uses the Musicam method for audio compression, which is based on MPEG-1 Audio Layer-2 (MP2). The useful data rates for the audio signals are between 1.2 Mbit/s and 1.5 Mbit/s and are sufficient to transmit 6 audio channels with high quality. The data rates for a stereo or surround channel can be up to 384 kbit/s. 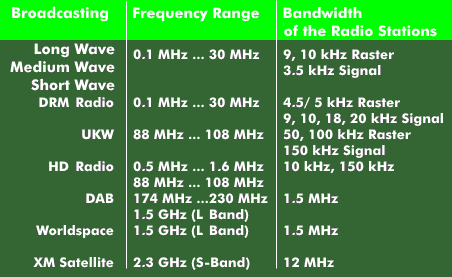 Since 1999, DAB has been broadcast as a regular service, initially in parallel with FM, via a common frequency network. It is received by DAB radio or digital radios. The advantages of digital broadcasting over FM lie in the high reception quality - also for mobile reception - and in a frequency economy that is higher by a factor of three. This, as well as the scalability of the data streams, is achieved by the coding and modulation methods used.

DAB can theoretically be transmitted on all VHF frequencies and UHF frequencies between 30 MHz and 3 GHz. Internationally, the World Administrative Radio Conference (WARC) has reserved the frequency range from 1.452 GHz to 1.492 GHz in the L band. These frequencies can be used for terrestrial transmission, T-DAB, as well as for satellite transmission, S-DAB; however, they are not binding. In Germany, for example, the Band III frequencies between 174 MHz and 239 MHz are used for T-DAB; beyond that, broadcasting takes place in the L band in metropolitan areas. For satellite transmission, there is Eureka 147 DAB, which is standardized in Europe.

In DAB, the audio data and the data services are multiplexed in the Main Service Channel( MSC) to form a data stream. Then the multiplexed data stream is multiplexed with the service information from the Fast Information Channel( FIC) in the transmission multiplexer and then modulated with Orthogonal Frequency Division Multiplex ( OFDM) or Coded Orthogonal Frequency Division Multiplex( COFDM). This data stream is radiated by the transmitter. A DAB channel has a bandwidth of 1.536 MHz. Channel coding by means of Coded Orthogonal Frequency Division Multiplex (COFDM) uses 192, 384, 768 or 1,536 carrier frequencies, depending on the mode, which are modulated by means of Differential Quaternary PhaseShift Keying( DQPSK). In the mode with 1,536 carriers, flawless reception is possible even at the highest movement speeds of up to 240 km/h. With 384 carrier signals and a channel spacing of 4 kHz, the movement speed can still be 120 km/h. 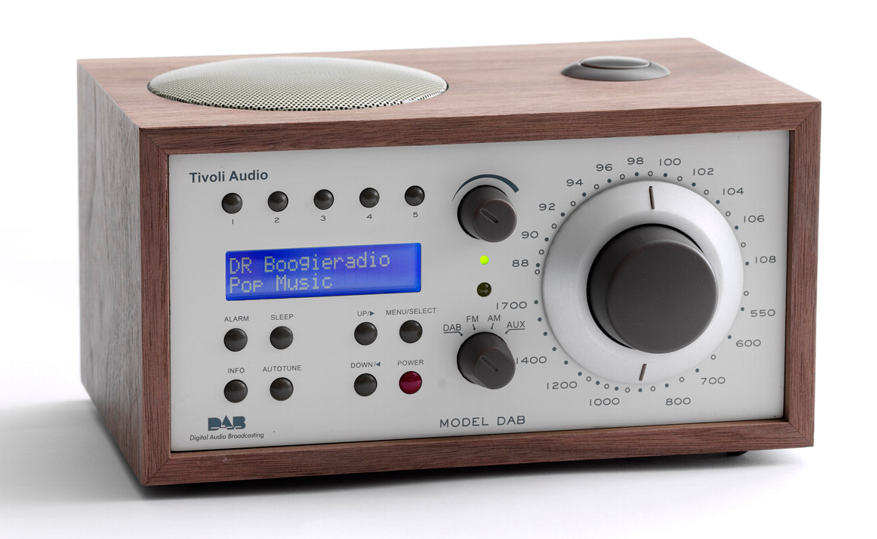 In addition to the transmission of mono and stereo, the DAB data stream with DAB Surround also supports surround sound. The method for surround sound is based on MPEG Sur round and is backward compatible with existing DAB receivers. Conceptually, in addition to pure audio transmission, the DAB data stream also transmits other data accompanying the program: Program Associated Data( PAD) and Non-Program Associated Data( NPAD). The latter services can be traffic information, IP-basedservices or radio text( RDS).

With DAB+, there is an improved variant to DAB, which works much more efficiently thanks to increased transmission power, new compression methods and transmission techniques, as it can transmit more programs in the cramped frequency band. DAB is not used in the U.S.; the corresponding competing method is called HD radio.