Stereophony is a multi-channel reproduction technique for audio. Stereophonic perception is based on sum localization and can be manipulated by signal propagation times and level differences so that the listener perceives a virtual sound source between the two speakers. The width of the virtual source depends on the information content of both channels. If this is relatively equal, then a point source is formed between the two loudspeakers; if the two audio signals differ greatly, then a wider sound source is formed. 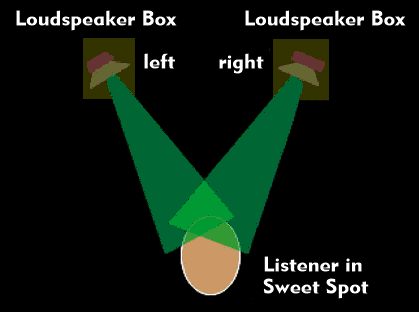 Stereophonic systems try to come close to the human hearing sensation by emitting directional sound information to the two sound sources via two separate transmission paths. In the playback room, a three-dimensional sound image is then present, which makes it possible to locate individual instruments or speakers.

Simple stereo technology (2.0) has two sound channels and two loudspeakers for the left and right channels. The 2.0 stands for 2 full sound channels and no low frequency channel. In addition to normal stereo, there is also joint stereo, which is more compressed because only certain frequency components of both channels are taken into account.

If stereophonic recordings are made with more than two microphones, this is called polymicrophony.