Orthogonal Frequency Division Multiplex (OFDM) is an extremely bandwidth-efficient multicarrier method that requires a much smaller frequency band than Frequency Division Multiplex( FDM) for the same transmission rate. In orthogonal frequency division multiplexing (OFDM), wideband signals are converted into narrowband orthogonal signals that are modulated over many subcarriers at a relatively low data rate. The number of subcarriers is specified in thousands (k); for example, an OFDM-2k has 2,096 subcarriers.

The OFDM signals are generated using an inverse discrete Fourier transform (IDFT). The peculiarity of OFDM is that the frequencies of each subcarrier are precisely determined from the symbol rate, such that a subcarrier reaches its maximum modulation amplitude when all other subcarriers have a zero crossing. The block length of the IDFT corresponds to the number of subcarriers. 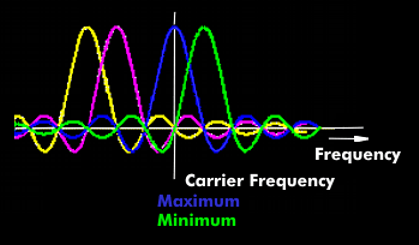 The IDFT transformation assumes that all subcarrier frequencies are orthogonal to each other. Each of these subcarriers is modulated with a part of the data. Since only a few data are transmitted on a subcarrier as a result, long symbol rates are obtained. These are less sensitive to interference and echoes than other modulation methods and therefore offer particular advantages in the case of severely degraded terrestrial transmission. Distortions due to reflections and delay differences, which occur as delay scattering in broadband transmission, are avoided. In addition, this technique requires a narrower frequency band than other multicarrier techniques, since no guard frequency band is needed between the individual subcarrier bands.

OFDM is used in terrestrial DigitalVideo Broadcast Terrestrial( DVB-T), Digital Audio Broadcast( DAB) and DRM radio, among others, as well as in WLANs according to IEEE 802.11a, in Long Term Evolution( LTE) and in HiperLAN. InWiMAX, OFDM is combined with Multiple Input Multiple Output( MIMO) and achieves a spectral efficiency of up to 8 bit/s/ Hz.