The Multipurpose Internet Mail Extension (MIME) is an extension to the Simple Mail Transfer Protocol( SMTP) to remove the limitations of the SMTP protocol with respect to text messages, graphics, audio, and other binaryfiles, since the SMTP protocol supports only text messages in 7-bitASCII character set. In contrast, Multipurpose Internet Mail Extensions (MIME) can be used to transmit text in 8-bit code, graphics, audio and video. For this purpose, MIME divides the various file types into main groups and subgroups, called media types and subtypes.

The individual MIME types of the various media types can be combined into a single message body. However, the recipient must be able to separate them again. MIME media types include: text, image, video, audio, and message. MIME subtypes separated from the media type by a slash, which define the MIME type in more detail, include: msword, html, javascript, jpg, gif, mpeg. Example: video/mpeg. 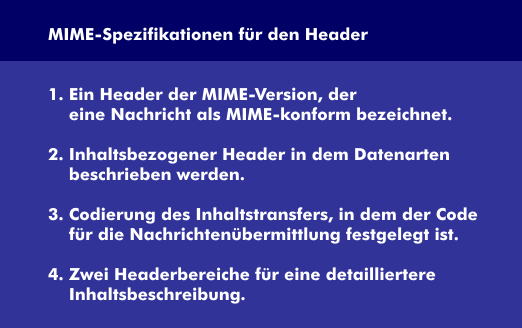 Specifications of the MIME header

A prerequisite for receiving and correctly displaying this multimedia electronic mail is that the recipient's mail program also supports the MIME standard. The MIME protocol is also used for communication between two communication partners on the Internet, between programs that work remotely from each other. For example, the different data of a web server for graphics and audio can be displayed directly on a browser using MIME.

During transmission, the file is described in the header. To make the data interpretable by all computers and operating systems, it is encoded before being sent. The 8-bit encoding used in the ASCII character set and the extended character set is therefore also converted into a 7-bit code and a 6-bit code. To increase data security, there is a MIME version with encryption, S/MIME.