A Micro-LEDnkArticle ItemID="30179" ArticleURL="LED display LED display" ArticleTitle="LED display">LED display consists of many tiny light emitting diodes, a few microns in size. According to the development status of 2019, micro LED displays are mainly used in small mobile devices. Large displays are still very costly to manufacture and are expected to hit the market in the later 20s.

In the placement process, hundreds of thousands of micro-LEDs are positioned to form a micro-LED display. Since the production process is still very costly, micro-LEDs are currently still mainly used in microdisplays. Thus in smart wearables, smart watches, cell phones, data glasses, VR glasses, Virtual Retinal Display( VRD), etc. The image resolution of fabricated micro-LED display can be HD quality or even the quality in UHD format. 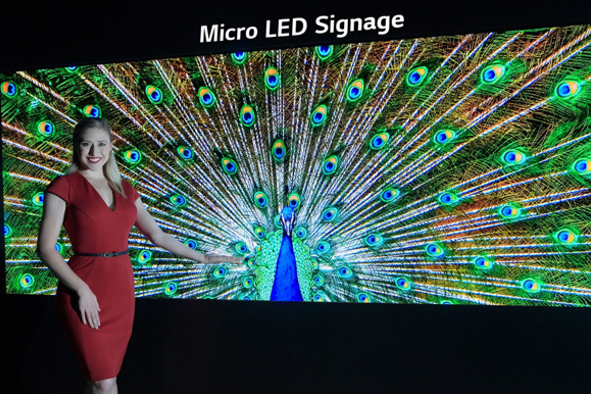 For larger screens and large displays, for example in the 4K standard with a resolution of 3,840 pixels horizontally and 2,160 pixels vertically, the pixels add up to 8.3 million, which have to be positioned individually. Since each pixel consists of three micro-LEDs for red, green and blue, we are talking about a total of around 25 million micro-LEDs. The pixels are grouped in modules of several thousand. The micro-LED modules consist of III-V compound semiconductors, which, divided as individual chips, are assembled and contacted on a backplane with a precision of one micrometer. The assembled micro-LED modules form the display for a large-screen TV, video wall, or movie wall.