Micro-LEDs, also known as µLEDs, micro-LEDs, MLEDs or mLEDs, are microscopically small LEDs made of indium gallium nitride( InGaN). They are built on conventional wafers and placed in displays using a special process on a larger substrate to form LED matrices or micro-LED displays. The size of micro-LEDs is a few micrometers.

Micro-LEDs are tiny LEDs made of organic polymer film that emit light in the primary colors of red, green and blue when a voltage is applied. They are about one-hundredth the size of classic light-emitting diodes, are self-luminous like OLEDs, and do not require backlighting or color and polarization filters. This makes displays made of micro-LEDs much thinner than OLED displays or TFT- LCD displays. 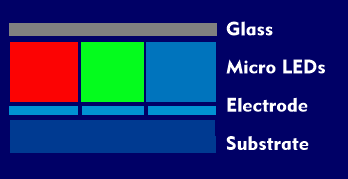 Structure of a Micro-LED

The individual pixels of micro-LEDs form tiny color dots that are combined in micro-LED displays. Due to the extremely small pixel size and a high fill factor, they have high illumination efficiency and many times higher brightness compared to OLEDs. In addition, their wide contrast range and high luminous efficiency should be mentioned, as well as their low energy consumption and, last but not least, their very short response time, which is much shorter than that of OLEDs.