Searching for an element in large amounts of data is often time-consuming - if the position is not known - if the search is performed sequentially element by element. Another possibility of finding data quickly and storing it sorted at the same time is offered by the so-called tree structure in addition to the hash table. In contrast to linear lists, trees are a branched structure; they are therefore non-linear. Thereby a tree is a recursive data structure, since it can be represented again by a set of subtrees. 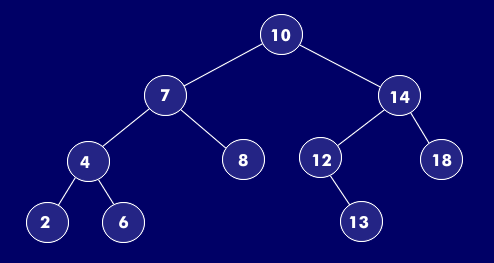 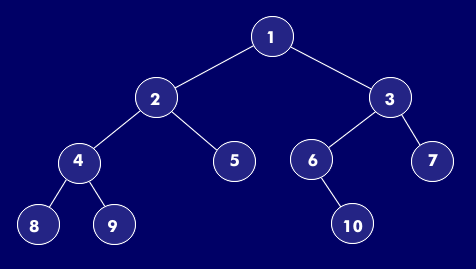 Numbering of the nodes of a tree structure

For terminology related to tree structures:

Tree Set of nodes and edges

EdgeConnection between two nodes. It is also used to denote the branches of a tree.

Path A sequence of different nodes connected by edges.

Root A distinguished node that has no predecessors.

Father Predecessor of a node.

Child Successor of a node.

Height This is the name given to the highest level of a tree. The root of a tree is always at level 0.

In computer science, a tree always starts "at the top" with the root. So the numbering of the nodes is from top to bottom, from left to right starting with 1. The drawing clarifies this structure and leads to the following observation:

A node i always has the successor 2i and 2i+1 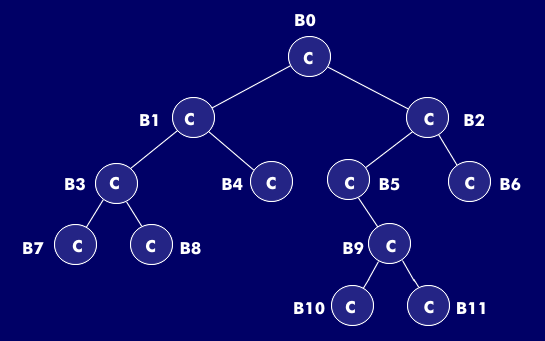 From this it can be concluded that nodes can be stored in an array - respecting the indexing starting with 0 in general.

A separate form of a graph are binary trees. A binary tree occurs when each element has at most two successors (n(max) = 2). One speaks of a right and a left successor. Each element can contain three pointers: One each for the left and the right successor, and another as a reference to the data. A binary tree analogous to the figure is called complete if at least one node that is not an end node has only one successor. For example, the Unix file system is a tree, but not a binary tree, because a directory can contain more than 2 files.

Nodes in a binary tree

To handle tree structures, the most important operations are finding a node, inserting a new node, and removing a node.

In computer science, the nodes in a tree are especially interesting when they represent objects from reality such as people, car parts, or airplane reservations. The different objects are distinguished by their so-called key value. Thekey value represents the value of an object, which is used to search for the object or to perform other operations on the object.

Tree structures are among the most important data structures in computer science and are used in various segments; for example, to organize a sorting process, to find elements in ordered sets, to organize successive decisions, or to represent the syntactic structure of sets of rules, grammars, or programs.