Classical lead-acid batteries use diluted sulfuric acid as the electrolyte, hence the name lead-acid battery. To increase the electrode area, they have a grid-like structure. Lead-acid batteries are charged in the first charging phase with constant current, and after a certain state of charge has been reached, further charging takes place with constant voltage. Their power density is between 250 W/kg and 500 W/kg, and their energy density is about 50 Wh/kg, which is considerably lower than the energy density of lithium-ion batteries. 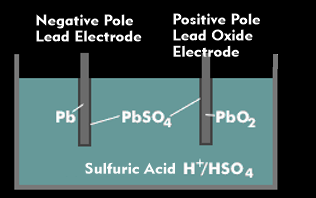 Structure of the lead-acid battery

Lead-acid batteries can be loaded with high current draw for short periods of time. Because of their relatively heavy weight and low self-discharge rate, which is between 1% and 3% per month, lead-acid batteries are also used in alarm systems, UPS systems and stationary transmitting and receiving equipment. The nominal voltage of lead-acid cells is 2.1 V when fully charged, their final discharge voltage is 1.75 V, their final charge voltage is 2.4 V, their nominal capacity is several hundred ampere-hours( Ah), and the number of charge cycles, which depends on temperature and design, can be up to 3,000. 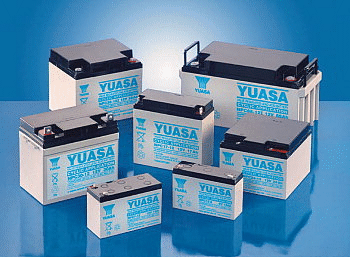 The further development of lead batteries has led to encapsulated designs in which degassing takes place via a pressure valve and in which the liquid sulfuric acid is bound. This design is called Valve Regulated Lead Acid( VRLA). There are two different VRLA designs: the Absorbent Glass Mat( AGM), in which a glass fiber fleece is impregnated with the sulfuric acid, and the gel battery, in which the acid is bound in a gel.