Lead-fleece batteries are high-performance lead-acid batteries in which a glass-fiber fleece is saturated with the electrolyte (sulfuric acid). As a result, a lead-fleece battery, known in English as an Absorbent Glass Mat (AGM), has no free sulfuric acid and can be operated in all positions. Leakage of the acid is not possible even if the AGM battery breaks.

AGM batteries have an extremely low internal resistance and can therefore supply higher discharge currents for short periods, for example during the starting phase of an engine. Due to the low internal resistance, the battery does not heat up even at high discharge currents. They can be deep discharged and have good capacity values even at low temperatures. AGM batteries are extremely robust and low-maintenance and can be charged and discharged several hundred times. Self-discharge is usually less than 1% to 3% per month, which makes their recharge interval larger than other batteries. 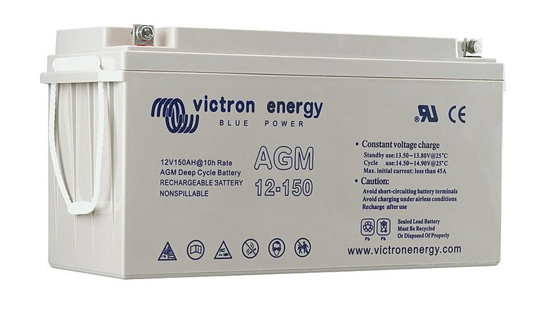 AGM batteries, like gel batteries, belong to the group of VRLA batteries, Valve Regulated Lead Acid (VRLA), and are therefore also called VRLA-AGM. These are encapsulated lead-acid batteries that balance the internal pressure via a valve.