Distributed Queue Dual Bus (DQDB) was standardized by IEEE 802.6 as part of MAN activities and can be used as a backbone in the distance range up to 100 km and further. The DQDB method was designed for hybrid city networks, it is characterized by high transmission rates and is suitable for the transmission of voice and data services, which can be synchronous, asynchronous or isochronous.

Technically, DQDB is implemented by fiber-optic dual buses, which are operated unidirectionally. Buses and rings are possible as topologies. Metropolitan area networks based on DQDB were designed from the outset for high data rates such as 34/45/155/600 Mbit/s, with the aim of creating high- performance inter- LAN links over these high-speed links.

The European DQDB version Connectionless Broadband Data Service( CBDS) and the North American Switched Multimegabit Data Service( SMDS) differ considerably in their names, but the actual implementations show only minimal differences. Both CBDS and SMDS use the DQDB specified in IEEE 802.6 as the transmission method. The data is transmitted as 53 byte long cells in 125 µs long frames.

DQDB as a double bus with high redundancy

In DQDB, each frame consists of a DQDB header, n cells and filler bits as required. The cells are generated in a cell or frame generator, the Head of Bus( HOB), and run in the DQDB bus until bus termination, where they are destroyed. Access control is provided by a corresponding DQDB access method, Queued Packet and Synchronous Exchange( QPSX), which can be thought of as distributed waiting. 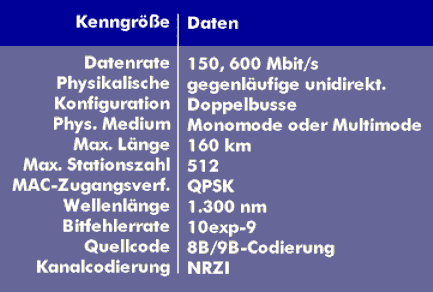 How many cells such a data frame contains depends on the bit rate of the MAN. Currently, the data rates 1.5 Mbit/s, 2.048 Mbit/s, 34 Mbit/s, 45 Mbit/s and 140 Mbit/s are supported. The DQDB-MAN has left the pilot stage and is offered as a regular service by the respective postal administrations in some European countries and by private network operators in North America. (USA: Pacific Bell, US West, Bell Atlantic, Europe: Germany, Italy, UK).

The DQDB concept is technically obsolete by today's standards and has never made the breakthrough in city networks. One of the few current applications is Deutsche Telekom's Datex-M, which uses SMDS as its base technology.

The topology of DQDB is a double bus composed of two unidirectional buses. Each node has connections to both buses, namely one read connection and one unidirectional write connection. Each node can communicate with any other node by sending it information on one of the two buses (selecting the bus to match the intended communication direction) and receiving information back on the other bus. In contrast to all other LAN topologies, the double bus supports a full- duplex connection between two communication partners even at the lowest level. Fiber optic cables are favored for the physical implementation. The draft standardization proposes the following standardized transmission systems and speeds: ITU: G.703 with 34.368 Mbit/s or 139.264 Mbit/s, ANSI: DS3 with 44.763 Mbit/s and ITU: G.707, G.708, G.709 Synchronous Digital Hierarchy( SDH) with 155.520 Mbit/s.