Switched Multimegabit Data Service (SMDS) is, like ATM, a connectionless datagram service developed by Bell Communication Research (Bellcore). The European version for SMDS is called Connectionless Broadband Data Service( CBDS) and differs only marginally from SMDS in terms of implementation.

Both MAN concepts, SMDS and CBDS, use Distributed Queue Dual Bus( DQDB) as the transmission method. The data is transmitted as 53 byte long cells with 44 user data bytes, 7 header bytes and 2 trailer bytes in 125 µs long data frames. How many cells such a frame contains depends on the transmission speed of the Metropolitan Area Network (MAN). At 34.368 Mbit/s, a 125-µs frame is 4296 bits long and can carry ten 53-byte cells.

SMDS provides a connectionless datagram service with transmission speeds of 1.5 Mbit/s, 2.048 Mbit/s, 34 Mbit/s, 45 Mbit/s, or 140 Mbit/s. In the context of appropriately equipped routers, SMDS can be used for completely transparent LAN coupling. There are also specifications for TCP/ IP protocols and for the Simple Network Management Protocol( SNMP), which will further simplify integration. 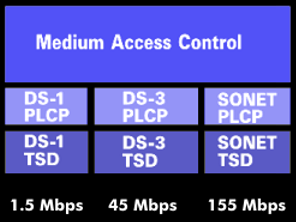 The Physical Data Unit( PDU) of SIP Layer 2 with a fixed length of 53 bytes is mapped onto the Physical Layer Convergence Protocol (PLCP) frame, which in turn is transmitted in the user data area of the respective PDH transmission frames. Since the length of ATM cells is also 53 bytes, the PLCP specification from SIP Layer 1 can be directly adopted for the transmission of ATM cells over PDH lines. The PLCPs are defined by Bellcore for transmission rates of 1.544 Mbps and 44.736 Mbps, for DS transmission interfaces DS-1 and DS-3. The SMDS Interface Protocol Layer 3 resides on SIP Layer 3.