Synchronous Digital Hierarchy (SDH) is a transmission system on the physical layer defined as a worldwide standard by the International Telecommunication Union ( ITU) in 1988, which replaces the conceptually obsolete Plesiochronous Digital Hierarchy( PDH) in the field of national and international wide area networks. The American variant of SDH is Synchronous Optical Network( SONET).

SDH is characterized by high transmission rates, ranging from 155 Mbit/s ( STM-1) to 40 Gbit/s (STM-256), as well as high availability and security. It enables the transmission of PDH signals, simplifies internetworking between carriers, the coupling and decoupling of signals, and provides continuity to the OTH hierarchy. Computer-aided synchrony is provided by a central clock signal. 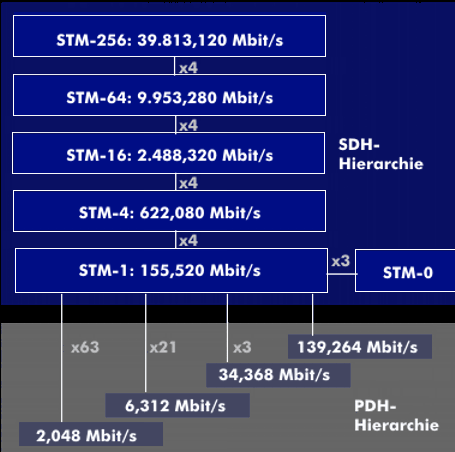 The SDH hierarchy is a flexible, transparent multiplex structure that offers several significant advantages over the Plesiochronous Digital Hierarchy (PDH). On the one hand, there is the ability to bundle bit frames with lower transmission speeds of, for example, 2 Mbit/s in a transmission frame of a higher hierarchy, which allows the network operator to react more flexibly to customer requirements. Secondly, the SDH-relevant network management, which enables shorter provisioning times and achieves higher transmission quality. In addition, the concept of virtual containers( VC-n), which can transmit a wide variety of traffic types, including ATM cells, in one transmission frame. SDH's transparent multiplex structure allows a 64 kbps channel to be decoupled directly from higher hierarchies. Next Generation Synchronous Digital Hierarchy( NG-SDH) further improves the flexibility and optimization of channel capacities. 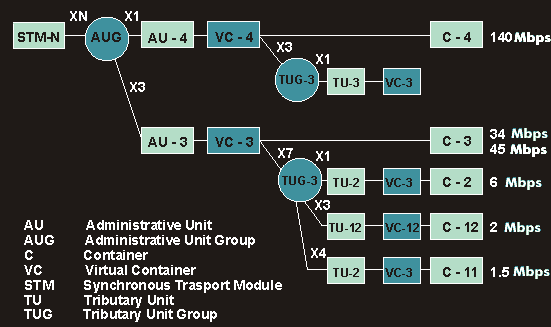 SDH systems are based on three different hierarchies: the American and the Japanese, each of which assumes a 24-channel system and a transmission speed of 1.544 Mbit/s (C-11), and the European, which was defined by the International Telecommunication Union (ITU) in Recommendations G.707, G.708, G .709 and is based on 30 channels. The transmission speed is 2.048 Mbit/s (C-12). The American system is based on Sonet. All three standards are used in asynchronous and in plesiochronous transmission methods. 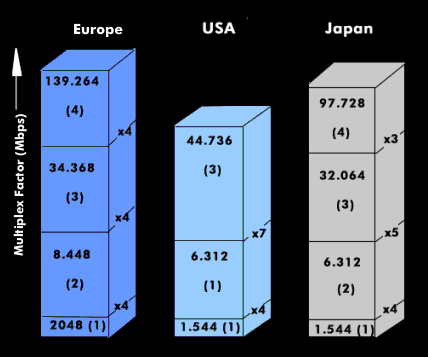 Multiplex hierarchy in Europe, the USA and Japan

Transmission rates of SDH and Sonet

The SDH specification is limited to describing the SI layer 1 transmission frame, so it is similar to the transmission frame definition for T transmission interfaces or E transmission interfaces. SDH can be used by transmission services such as ATM as a physical transport medium. The SDH standard has been extended with respect to packet-oriented data so that Ethernet data packets can also be transmitted as payloads over SDH. These SDH extensions include the Generic Framing Procedure( GFP), Virtual Concatenation( VCAT) and the Link Capacity Adjustment Scheme( LCAS).