Digital Light Processing(DLP) is a technology developed by Texas Instruments based on microsystems technology in which tiny square micromirrors reflect the light from the light source onto the projection surface. The micromirrors are controlled by the electrostatic fields of CMOS circuits placed under them. In addition, a process of the same name is used in 3D printing technology.

The micromirrors acting as light switches are located on a Digital Micromirror Device( DMD) and are each responsible for projecting a single pixel. Depending on the resolution, such a DMD chip can consist of several million mirrors, each of which can be switched several thousand times a second 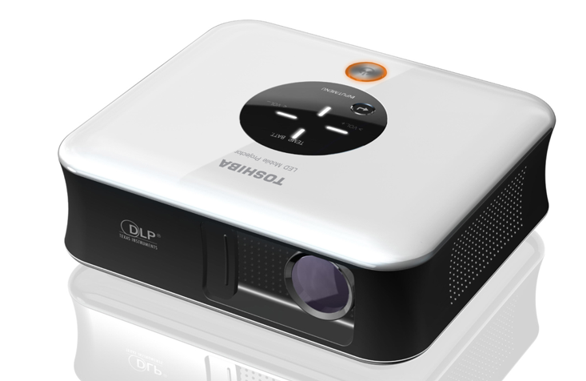 Dependingon the application, DLP projectors used in meeting and training rooms, convention centers and cinemas are of one-, two- or three-chip design. In addition to these designs, there is also the LED projector, in which the mirrors are directly illuminated by three colored light-emitting diodes (LEDs), and the single-mirror concept, in which a gimbaled micromirror deflects the red, green and blue light beams from three lasers and reflects them line by line onto the projection screen. This single-mirror technology is used in mini projectors. 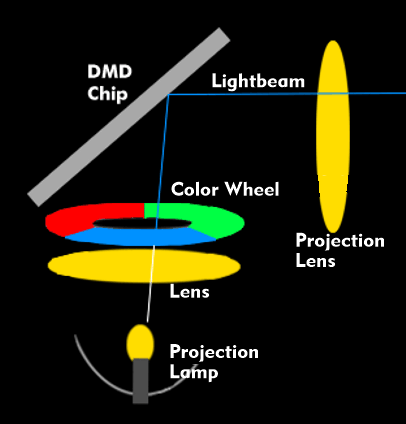 DLP projector with a DMD chip

In contrast to single-mirror technology, single-chip technology generates the colored light via a color wheel consisting of three filters for the primary colorsred, green and blue. The color wheel rotates at a speed of 3,600 rpm in the light beam and, synchronously, the mirror is tilted to reflect a specific color. If, for example, green is to be reflected, then the mirror tilts at the moment when the light from the light source passes the green filter and the beam falls on the mirror. From there, it is reflected by the tilted mirror via the optics onto the projection screen. The color display is therefore sequential. 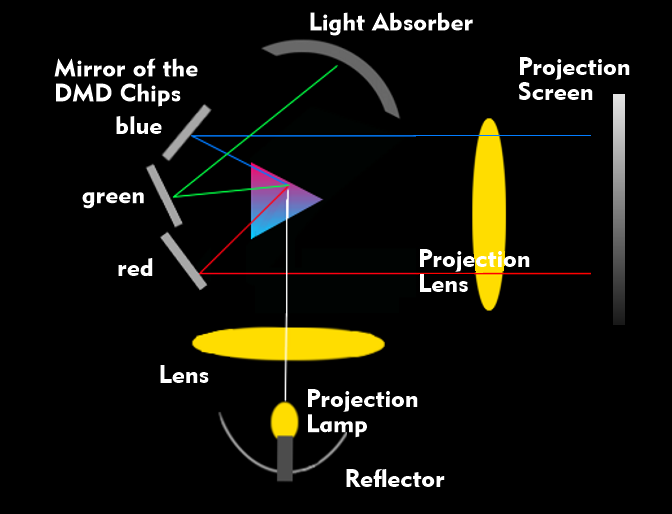 Color saturation and hue take advantage of the inertia of the human eye and are generated by switching times during the corresponding primary colors. For example, yellow is created by reflecting red and the green through the mirrors for equal units of time, while blue is not reflected.

The two-chip technology filters out the secondary colors magenta and yellow via the color wheel and generates the primary colors red, green and blue from these colors via a color splitter prism. One DMD chip is assigned to red, the other for the colors green and blue. 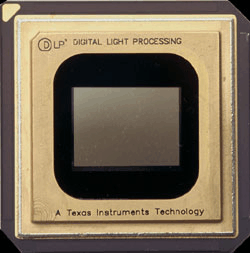 With the three-chip technology, color splitting is done via a prism and each primary color is switched via its own DMD chip. As in the one-chip version, the color shades are achieved via the switching times.

A DLP projection can certainly display up to 16 million color tones. Especially the projections with the three-chip technology are suitable for high- performance projectors and are characterized by a high projected brightness, which is over 2,000 ANSI lumens. Professional three-chip projectors achieve illuminances of 12,000 ANSI lumens with projector lamps of 3,000 watts.

DLP projectors are equally suitable for front and rear projection of computer displays in Video Graphics Array( VGA), Super-VGA( SVGA), Extended Graphics Adapter(XGA) up to Super-XGA( SXGA) and also for video and HDTV in 4:3 and 16:9 formats in Wide-XGA( WXGA).

The DLP process, Digital Light Processing (DLP), is also used in 3D printing technology. In this process, the individual layers of liquid resin are cured with a strong light projection. Since the resolution is very high, edge-free objects can be printed with appropriate 3D prin ters.